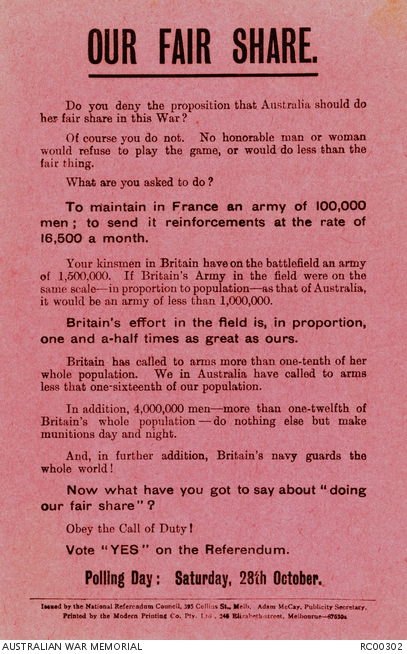 Colour leaflet on the Referendum. "Our fair share. Do you deny the proposition that Australia should do her fair share in this War? Of course you do not. No honorable man or woman would refuse to play the game, or would do less than the fair thing. What are you asked to do? To maintain in France an army of 100,000 men; to send it reinforcements at the rate of 16,500 a month. Your kinsmen in Britain have on the battlefield an army of 1,500,000. If Britain's Army in the field were on the same scale - in proportion to population - as that of Australia, it would be an army of less than 1,000,000. Britain's effort in the field is, in proportion, one and a-half times as great as ours. Britain has called to arms more than one-tenth of her whole population. We in Australia have called to arms less than one-sixteenth of our population. In addition, 4,000,000 men - more than one-twelfth of Britain's whole population - do nothing else but make munitions day and night. And, in further addition, Britain's navy guards the whole world! Now what have you got to say about 'doing our fair share'? Obey the Call of Duty! Vote 'YES' on the Referendum. Polling Day: Saturday, 28th October."