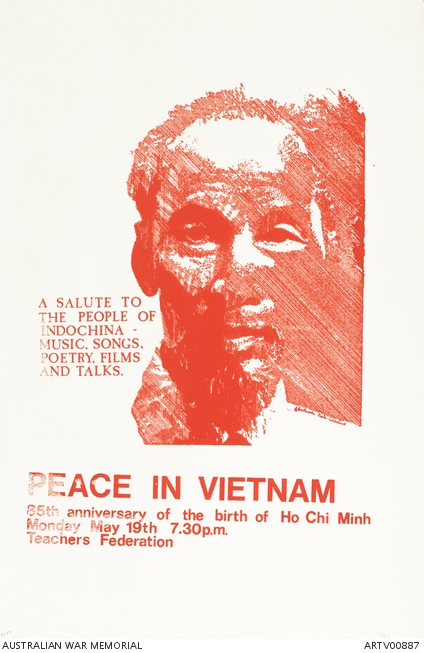 Portrait of Ho Chi Minh, with accompanying text advertising a celebration to mark his 85th birthday, as well as appealing for peace in Vietnam. Ho Chi Minh has been described as a' seasoned revolutionary and passionate nationalist obsessed with a single goal:independence for his country'.He is one of the most well known Vietnamese because of his leading role in the war between North and South Vietnam, the Vietnam War (1954-1975), as well as being the spiritual leader of the Vietnamese Communist regime. Ho Chi Minh was born in 1890 in a village in central Vietnam. His birth name was Nguyen Tat Thanh but he also went by other names; Nguyen Van Ba and Nguyen Sinh Cung. He also had around 10 other aliases. As a young man, Ho participated in a series of tax revolts, acquiring a reputation as a trouble maker. In 1911 he travelled to Marseilles, France, as a galley boy aboard a passenger liner. In 1929 he 'assembled a few militants in Hong Kong and formed the Indochinese Communist Party'. Ho was later arrested in Chinese Kuomintang, where he used the name Ho Chi Minh. He was subsequently released and worked with the American OSS (Office of Strategic Services) in Kunming, capital of Yunnan Province, China. While being the Party leader and president of North Vietnam, Ho used another alias, Tran Dan Tien. As war increasingly destroyed the country, he remained committed to Vietnam's independence. After the 1975 takeover of South Vietnam, Vietnamese communist leaders hurriedly renamed Saigon Ho Chi Minh city in remembrance of the place in which Ho had started his revolutionary cause. He died on 2 September 1969 at the age of 79.