Now : the bayonets have won through, its your turn now, buy war savings certificates 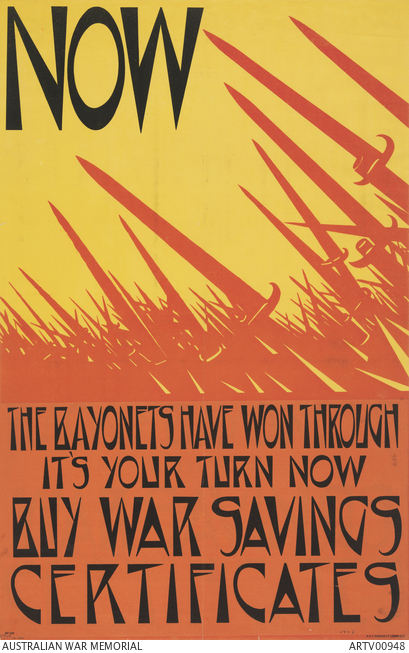 This British First World War poster was printed by H & C Graham and aims to encourage the public to purchase war savings certificates. The main image is of a thick line of Bayonets, pointing upwards and to the left. The bayonets are printed in orange and set against a yellow background. Black text appears above and below the image. The National Savings Movement was founded in the autumn of 1915 when the Committee on War Loans for Small Investors, was appointed to consider means of encouraging the public to save money to help the war effort. In January 1916 the committee advocated the organisation of local voluntary savings associations and the introduction of 'war savings deposits', later designated 'war savings certificates', and now as 'national savings certificates'. By a Treasury minute of 8 February 1916 two committees were set up: the National Organising Committee for War Savings and the Central Advisory Committee for War Savings. In April 1916 these two committees were combined as the National War Savings Committee. The aim of the National Savings Committee was to maintain throughout England and Wales an organisation to encourage the public to save by investment in national savings securities and deposits in the National (formerly Post Office) and Trustee Savings Banks.