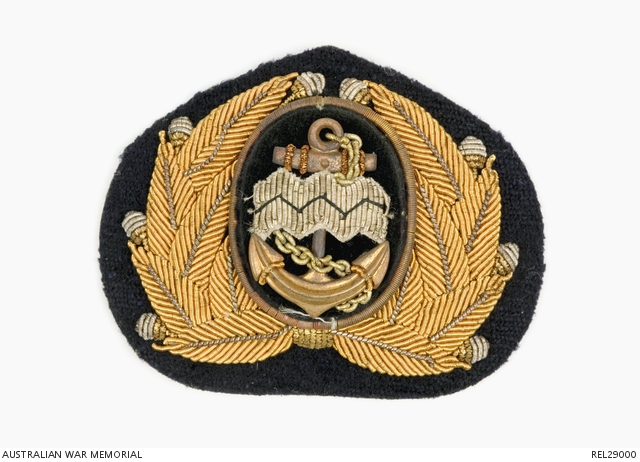 Japanese Navy Gunzoku officer's cap badge, based on the Imperial Navy badge, but lacking the chrysanthanum. Centrally mounted on a raised black wool oval pad is the Japanese anchor, cast in brass, around which is twined a chain in gold wire. Sewn across the centre of the anchor is the triple zig-zag insignia, in silver wire with a black centre bar, signifying Military Police. The oval pad is framed with two brass rings, one of which has detached. Surrounding the anchor is a wreath of acorn leaves in gold and silver bullion with acorns in silver. The whole is sewn to a black wool backing, which is itself glued to a thick paper base.

"Gunzoku" were militarised civilian personnel attached to, or conscripted to, the Imperial Japanese Armed Forces. Gunzoku was a remnant of the old Japanese court system, which incorporated a civilianised ranking system. The Gunzoku system appears to have applied to foreign nationals either impressed into, or volunteering for Japanese service, as well as Japanese personnel who may not have been otherwise eligible for service due to age, illness or other factors, or simply a civilian in military employment. Many Gunzoku, for example, were used as prison guards, clerks and drivers, thus freeing up many men for active service. This particular cap badge would have been worn by a lower ranking Japanese naval Gunzoku serving as a military policeman.

This cap badge was kept by Thomas Charles Eastick at the end of the Seond World War. Eastick was born in Adelaide on 3 May 1900. After a hard childhood looking after his sick mother and siblings, in 1918 he enlisted in the 13th Field Brigade, Australian Field Artillery (Militia) where, in 1926, he demonstrated several innovations which were a first for the AFA – surveying instead of ranging to engage targets; and the use of aircraft to observe and correct his targeting – the forerunners of the forward air controllers. He quickly rose in command in the artillery, and by 1939, had been promoted to lieutenant colonel and appointed CO of the brigade.

Embarking for the Middle East in November 1940 at the head of 2/7th Field Regiment, 9th Division. Eastick commanded the brigade through 1941, including at the battles of Tel el Eisa in July and El Alemein in October and November 1941, for which he was awarded the Distinguished Service Order. After a stint in Syria and Lebanon, he returned to Australia in early 1943 and was promoted to temporary brigadier to command the 7th Division in New Guinea during 1943 and 44.
Eastick was appointed to command the 9th Division’s artillery from June 1944, and he saw action in Morotai and Borneo before taking command of Kuching Force in 1945. He took the surrender of the Japanese forces under Major General H Yamamura in Kuching at the end of the war.

It is thought that he amassed this collection of Japanese badges in Kuching after the war.