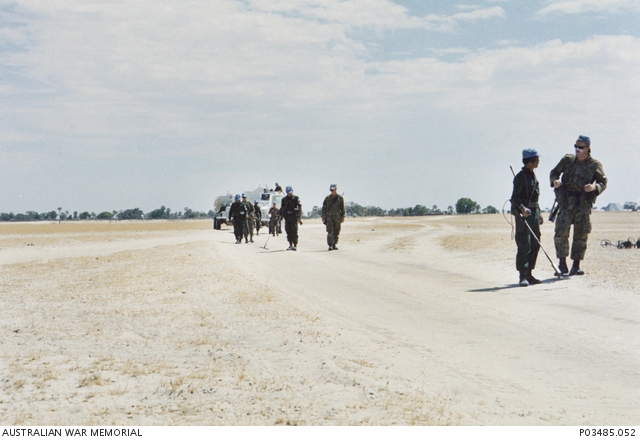 Australian soldiers probably of 17th Construction Squadron, part of the United Nations Transition Assistance Group (UNTAG), teaching Malay Infantry Battalion pioneers mine clearance techniques. UNTAG was established to ensure the independence of Namibia through free and fair elections under the supervision and control of the United Nations. It was also to ensure that South Africa withdrew from the country, all hostile acts ended, all discriminatory laws were repealed, political prisoners were released and Namibian refugees were permitted to return. The first UNTAG members arrived on 1 April 1989, and the force consisted of members from 124 nations, with a maximum of 7500 troops and 2000 international civilian and local staff. Namibia was divided into 23 electoral districts and registration centres were set up all over the country, with registration of more than 700,000 voters occurring between 3 July 1989 and 23 September 1989. UNTAG monitored the balloting and counting of votes in the elections held between 7 – 11 November 1989 to chose the 72 delegates to the new Constituent Assembly. The Assembly met for the first time to draft a new constitution, on 21 November 1989, the day after South Africa’s remaining troops had left the country. The draft was unanimously approved on 9 February 1990 and on 16 February 1990, the Assembly elected SWAPO leader Sam Nujoma as President, who was sworn in by the United Nations Secretary General on 21 March 1990, the same day UNTAG’s mandate ended.