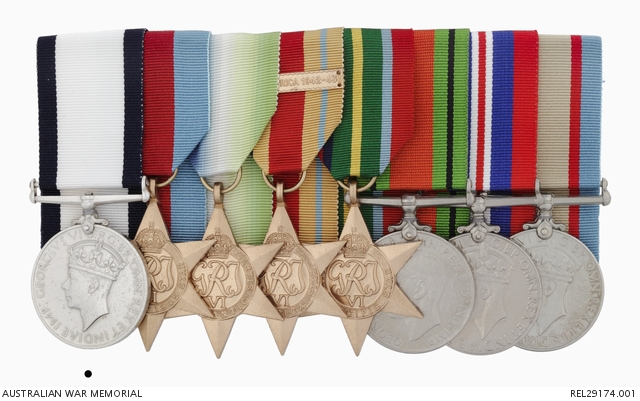 Ordinary Seaman PMV18 Ian Desmond Laurie-Rhodes was awarded this Conspicuous Gallantry Medal for action in HMS Kashmir during the Battle of Crete on 23 May 1941. It is the only such medal ever awarded to an Australian sailor.

Laurie-Rhodes was born in Waipana, New Zealand in August 1912 and soon after moved with his family to Australia. He enlisted in the Royal Australian Naval Volunteer Reserve (RANVR) in September 1940, under the name of Rhodes, probably to disguise the fact that he had already tried to enlist in all three services but had been rejected medically unfit due to a stomach ulcer.

Sent to Britain under the Admiralty Yachtsman’s Scheme, Rhodes was posted to the British destroyer HMS Kashmir and was with the ship in May 1941 when it took part in the naval blockade of Crete to prevent the Germans from landing troops on the island. On 23 May, Kashmir, together with HMS Kelly and HMS Kipling, were sailing to Egypt for refuelling when they came under heavy attack by German fighters and bombers. Kashmir suffered a direct hit and was cut in half. While preparing to join the other survivors in the sea, Rhodes saw a German bomber approach and begin to strafe the rear of the ship and struggling sailors in the water. He left the port Oerlikon gun (on which he was the gunlayer) which was sinking as the stern of the ship tilted, climbed to the nearby starboard Oerlikon, and fired on the bomber causing it to crash.

For his courageous and selfless actions during the attack, Rhodes was awarded the Conspicuous Gallantry Medal, second only to the Victoria Cross in awards available to seaman. The citation reads, 'For outstanding gallantry, fortitude and resolution during the Battle of Crete. After HMS KASHMIR had been hit amidships by a bomb and was sinking, the afterpart was machine-gunned at short range by a JU.87 bomber. Ordinary Seaman RHODES was gunlayer of the Port Oerlikon which was at that time going under water. In spite of the fact that the ship was sinking rapidly, he climbed up to the Starboard Oerlikon and opened fire on the aircraft, which was hit and crashed a few cables away'.

Rhodes' own account of the action explains further: 'Kelly turned turtle as a bomb crashed on her quarter-deck, and a bomb landed in front of me, cutting the Kashmir in half. My part of the ship - the stern - listed to port, and I continued firing until the gun was submerged. Then I crawled to starboard, intending to dive overboard, when a Stuka began dive-bombing and machine-gunning the swimming members of the crew. A German spotted me, and sent a stream of bullets at me. I got in a long burst, and saw the plane crash a hundred yards away. Kipling, whose steering-gear had been put out of action earlier, now re-appeared, steering with her engines, but, although attacked, she had a charmed life, and the crew calmly went on picking up survivors. All the eight Australians on board were rescued.'

In September, he was promoted to able seaman. He was commissioned in January 1942 and promoted lieutenant in August. In April 1942 he joined the cruiser HMS Sheffield, serving in the Atlantic and as an escort for the Arctic convoys to Russia. In March 1943 he transferred to the Australian cruiser HMAS Shropshire, remaining with the ship until July 1944. Rhodes then posted to the royal navy's HMS Mount Stewart, their special operations training base in Devon. He later served on shore at Colombo, Ceylon, and was serving ashore at Port Moresby when the war ended.

Following the termination of his appointment with the RANVR in April 1946 Rhodes turned to farming in the Labertouche region of Victoria and later became a company director. Ian Laurie-Rhodes died on 3 January 1967.