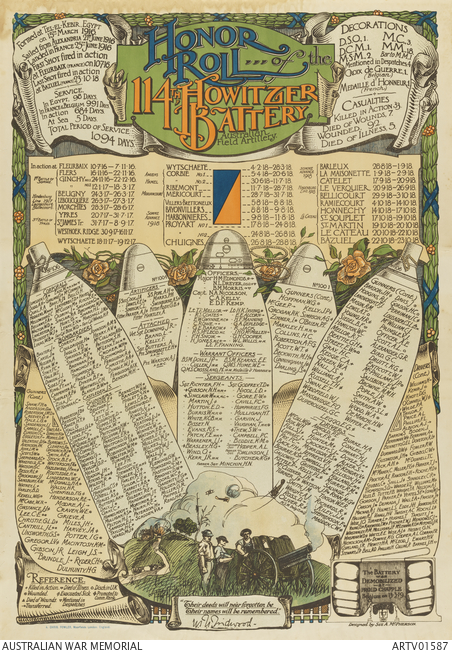 First World War Honor Roll of the 114th Howitzer Battery Australian Field Artillery designed by Sgt. A. McPherson and printed by A. Chris Fowler in London. Formed in Eygpt in March 1916 the Battery saw action in France and Belgium including at the Somme, Hindenburg Line and Ypres. The poster is designed so that the names of all the men who served with the Battery during the First World War are inscribed over outlines of artillery shells scattered amongst scrolls, roses and laurel wreaths. In the bottom centre is a colour illustration of a gun crew in the field. Several air craft are flying overhead and a dirt road is visible in the background leading towards war damaged buildings. Scrolls in the upper left and upper right corners detail the Battery's history, service and decorations. Another scroll in the upper centre lists the actions the Battery were involved in between 1916 and 1918. In the upper centre the Battery colour patch is visible.