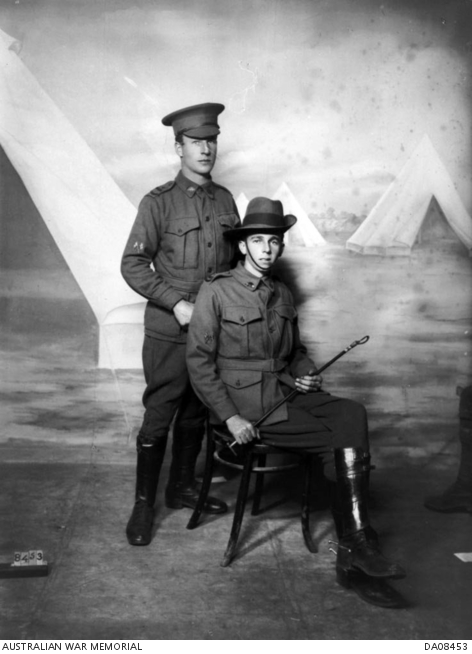 Studio portrait of 1017 Sapper (Spr) Charles Edward Kingsford-Smith, of Neutral Bay, NSW (left) and Spr William Raymond Kingsford, of Double Bay, NSW (right). Both soldiers served with the 4th Light Horse Brigade, 4th Signal Troop. Spr Kingsford-Smith enlisted on 10 February 1915 and embarked aboard HMAT Ajana on 31 May 1915. In October 1916 he transferred to the Australian Flying Corps where he served as a Sergeant. On 16 March 1917 he was discharged from the AIF and later commissioned as a Second Lieutenant with the Royal Flying Corps. Spr Kingsford enlisted on 9 March 1915 and embarked aboard HMAT Adjana on 31 May 1915. He was commissioned on 28 July 1918 and served as a Lieutenant with the Australian Flying Corps before his return to Australia on 17 March 1919.