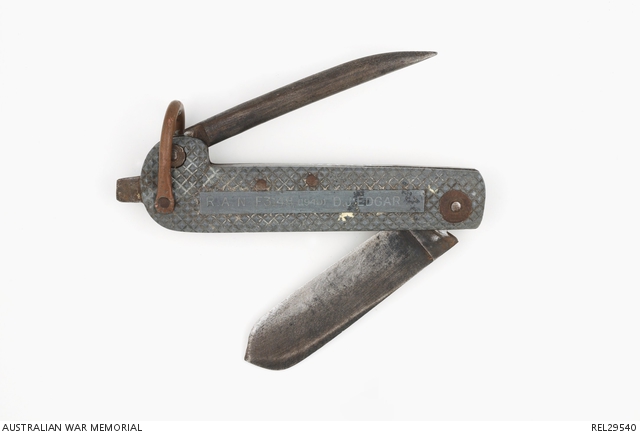 Standard navy issue seaman's splicing knife manufactured by G. Ibberson & Co of Sheffield to a pattern still being produced. The unit features an 80 mm folding blade, the base of which is stamped 'G. IBBERSON & CO / SHEFFIELD / ENGLAND' surmounted by a stamped violin. The opposite end of the knife is equipped with a 100 mm marlin spike. The handle is cut with a diamond pattern grip and is fitted with a swivel metal carrying loop. One side of the grip features a raised 76 x 7 mm flat name plate onto which Ordinary Seaman Edgar has had his personal details engraved. At the spike end of the knife is a short 9 mm fixed screwdriver blade. The entire unit is rivetted together.

Splicing knife used by F3148 David James Edgar. Edgar was born on 27 January 1914 at Wagin, WA. Edgar enlisted at Fremantle in the Royal Australian Navy (RAN) in 1940 and saw service aboard HMAS Canberra in the Indian Ocean and the Seychelles, off the eastern coast of Africa, and was present when Canberra sunk the German raider Coburg and her attendant tanker Ketty Brovig on 4 March 1941.

He was discharged on medical grounds (conjunctivitis) and re-enlisted in the Bulk Installation Petroleum Distribution Service (BIPODS - a militia unit) - a unit which, according to his son, 'did most of its very casual training around the Raffles Hotel in Applecross, near Fremantle'. With the distinct likelihood being that he would be sent to guard a fuel dump somewhere in the back end of the Simpson Desert, Dave joined the RAAF on 4 December 1942.

As 82565, Edgar trained as an engine fitter in West Australia and Victoria, attained the rank of leading aircraftman (LAC) and was posted to 25 (City of Perth) Squadron while they were operating as a defensive squadron flying Vultee Vengeance dive bombers. He was then transferred to 22 (City of Sydney) Squadron, which had been operating Douglas Bostons from Kiriwina Island before moving to Noemfoor Island and converting to Bristol Beaufighters. Edgar continued maintaining these aircraft until the end of the war, finishing his tour on Morotai Island. Edgar is one of the few Australian servicemen to serve in all three services during the Second World War.