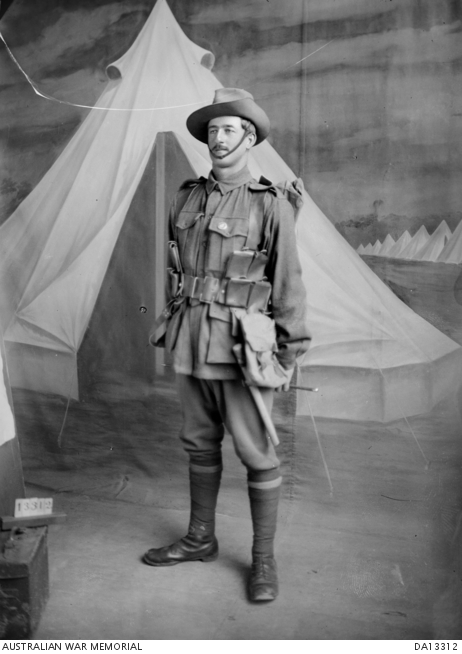 Studio portrait of 4288 Private (Pte) Percival Herman Pieper. A farmer from Mitiamo, Victoria prior to enlistment, Pte Pieper embarked with the 13th Reinforcements, 6th Battalion from Melbourne on HMAT Demosthenes on 29 December 1915. He later transferred to the 17th Light Trench Mortar Battery (LTMB) and then to the 6th LTMB. He was subsequently invalided to England suffering from pneumonia and bronchitis. After recovering he re-joined his unit and was admitted to hospital suffering from cellulitis of the left leg. Following his recovery he again re-joined his unit and was wounded in the right thigh and left leg and admitted to the 38th Casualty Clearing Station. It was here where on 6 October 1918, aged 28, he succumbed to his wounds and was buried in the Tincourt New British Cemetery, Picardie, France. His brother 1846 Pte Francis Claude Pieper also served and was severely wounded. This is one of a series of photographs taken by the Darge Photographic Company which had a concession to take photographs at the Broadmeadows and Seymour army camps during the First World War. In the 1930s, the Australian War Memorial purchased the original glass negatives from Algernon Darge, along with the photographers’ notebooks. The notebooks contain brief details, usually a surname or unit name, for each negative.