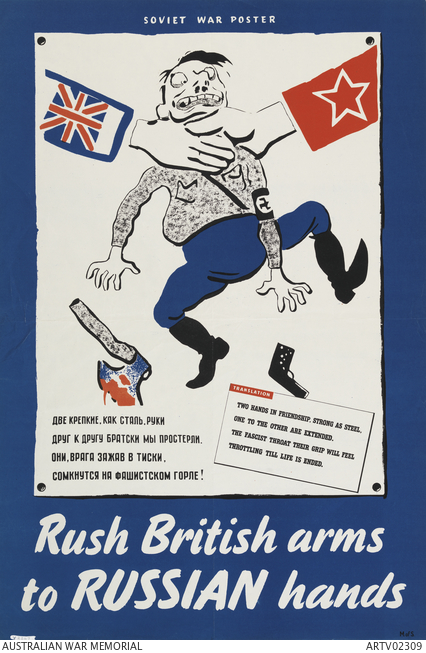 British Second World War poster issued by the Ministry of Supply in 1941. It was produced for display in factories to encourage increased production in support of the entry of the Soviet Union on the Allied side. It features a reproduction of a Soviet poster positioned in the upper two thirds. The title is printed in white beneath the poster and both are set against a dark blue background.

The original Soviet poster was a reduced version of TASS No.68, 14 July 1941. The TASS poster was created to mark the new Anglo-Soviet alliance signed on 12 July 1941. It featured a satirical cartoon by Nikolai Radlov (1889-1942) of Hitler gripped at the throat by the British and Soviet flags. The two British and Russian hands are depicted in unison to form a stranglehold around the neck of Hitler who has dropped a pistol and a bloodied axe in the struggle. It illustrated a poem written by 'the Litbrigade'. This text appears in the British reproduction with an English translation: 'Two hands in friendship, strong as steel,/ one to the other are extended./ The fascist throat their grip will feel/ throttling till life is ended.'

The TASS poster was mass produced for higher distribution due to its popularity and became a stock image in Soviet propaganda during the Second World War. The image of the handshake was also popular internationally and copied by cartoonists in the United States and Australia. The Daily Telegraph's cartoonist, Will Mahony, created his own interpretation.(See ART94330)