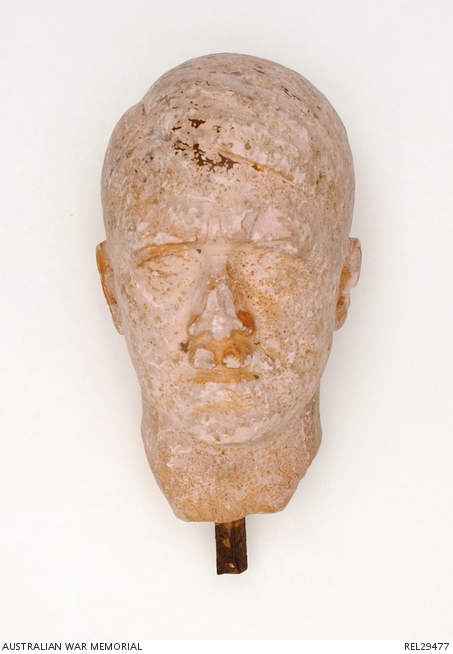 Small plaster bust of Adolf Hitler. Originally bronze washed and sitting on a wooden plinth, the bust was severely damaged by fire in 1944 and none of the outer coating or timber base remains. The plaster head is now a light pastel pink colour with brown staining all over it. The bust is chipped and scratched and has major damage to the left eyebrow, left ear, nose and moustache. A square iron rod protrudes from the underside of the neck originally for attachment to a wooden plinth.

Busts of this type were apparently a standard issue to German area commanders in Europe. This bust belonged to the German commander at Oirschot in the Netherlands, and was always positioned on his desk. When Holland was liberated in 1944, and the Allied troops reached Breda, the commander was ordered to return to Germany taking with him only important documents and destroying the rest before he left. The bust of Hitler, which was originally covered with a bronze wash and mounted on a wooden base, was recovered from the ashes of the office fire the following day by Antoon Van De Ven.

Van De Ven was involved in the Dutch underground where he took part in the sabotage of vital machine parts destined for German cotton mills involved in the manufacture of uniforms. He was also involved in the escape network assisting downed Allied pilots to escape behind German lines. Van De Ven migrated to Australia, with his family, in 1960, aboard SS Waterman, and lived in Sydney.