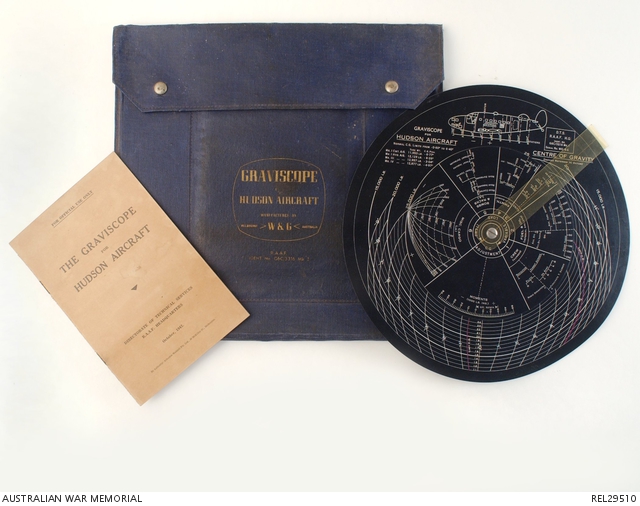 A double-sided, three disc mechanical calculator for determining gross weight, centre of gravity and the effects of cargo, crew and fuel on the performance of a Hudson aircraft. Made from plastic and celluloid. With original leatherette carrying folder and printed booklet.

Graviscopes were used by crew members to determine the effect of the gross weight of the aircraft and that weight's effect on cargo movement, crew movement, fuel consumption, ammunition and bomb consumption and other relevant factors, "thus enabling the aircraft to be flown most efficiently and without danger arising from longitudinal instability" (from the accompanying booklet, which was published in October 1942). The graviscope is made from three different sized black plastic discs, centrally joined so they pivot, with all information etched in white. A 2.5 cm clear celluloid strip, folded so it pivots on each side, overlays the discs. The graviscope includes an illustration of a RAAF Lockheed Hudson with all datum points marked. The accompanying square brown leatherette carrying folder has a large internal pocket for the graviscope and a smaller, external pocket to store the accompanying instructional booklet. Issued by the Directorate of Technical Services, RAAF Headquarters. Indent number G6C/3316 Mk 1 Serial No WG/44.