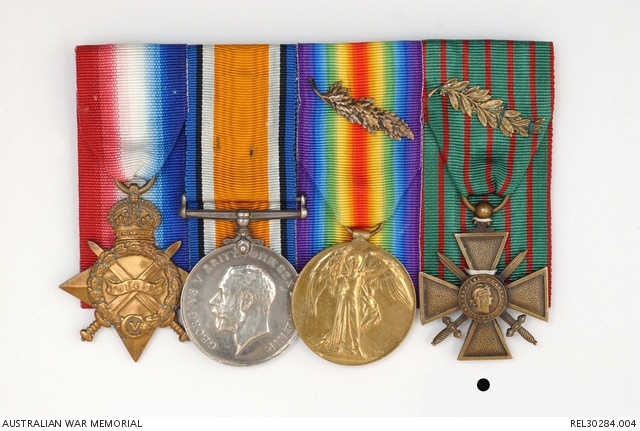 Awarded to 2264 Sergeant John William Scott. Scott enlisted in May 1915. He trained as a signaller at Broadmeadows in Melbourne and sailed to Egypt in September 1915 with 4 Reinforcements, 18 Battalion. In June 1916, on the Western Front, Scott was transferred to 110 Howitzer Battery, 10 Field Artillery Brigade. With the rank of Sergeant he won the French Croix de Guerre in October 1917 and was mentioned in dispatches in May 1918. Scott was wounded whilst serving on the Western Front and was hospitalised twice. He received his commission to the rank of Lieutenant in 1919 and remained in France with 41 Battalion for demobilisation purposes. He returned to Australia aboard the SS Euripides in October 1919. The citation for his Croix de Guerre reads, 'For conspicuous bravery and devotion to duty. On October 4th 1917 at BROODSEINDE ridge East of Ypres, this N.C.O. was in charge of the Specialists who accompanied the Artillery F.O.O. [forward observation officer] during our infantry attack. In spite of intense shell and machine gun fire he carried out his duties and maintained visual communication from the Ridge back when all other means failed. His gallant and sterling service was not only of infinite value to the Artillery closely supporting the attack, but set a splendid example to all.'