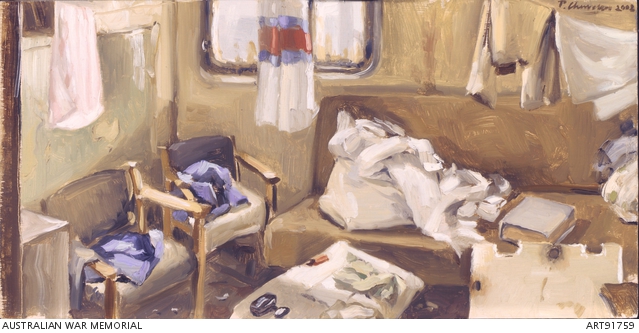 Interior of a cabin in the Iraqi smugglers; ship in the South Persian Gulf. Churcher's diary entry reads, "Feb 12 [underlined] - today it was suggested that I board a small boat and go over to the Iraqi smuggling vessel which we were escorting. I was reticent, as I had my heart set on painting the Messman Jackson (which I can do tomorrow). So off I went. When we reached the ship, it had a strange, eerie people-less feel about it. I then discovered all the crew were being held captive below like an intruder on their ship. Anyway, we were shown inside. The rooms were filthy, squalid, rooms with bits of rubbish everywhere, a heavy, airless, musty odour pervaded the rooms. Everything appeared to be left as it was, piles of dirty laundry, dirty cups etc. The squalid nature of the living conditions came as a shock to me. In one room was a photograph of three small children of ages 4-12, posed together as a group portrait. Their Daddy was down below. I wondered what we were doing on this ship".