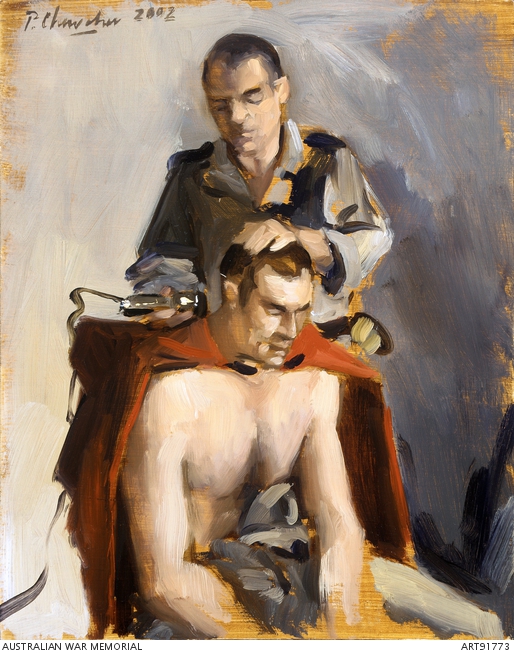 Painting of Corporal Steve Trood, Ship's Army Department giving Petty Officer Clearance Diver (POCD) Darby Munro from Australian Clearance Diving Team 1 (AUSTCD1) a haircut. Peter Churcher recalled, "Whilst I was painting the 'hangar' which was my first morning of painting on the ship I noticed an activity going on behind me. One of the divers was receiving an impromptu haircut from an officer. The red cape around his shoulders to catch the falling hair was in fact a plastic cover from a piece of medical equipment that was being stored in the hangar. Images like these that I saw out of the corner of my eye were the ones that I was most intent on capturing. I asked Jo Straczek my escort if he could ask these gentlemen to re-stage this event for me the next day so I could get it down in paint. It probably took me about an hour. They were only willing to work for an hour. That was the beauty of it. I was forced to work quickly. I don't regret that I didn't have more time. I surprised myself by what I was able to capture and any more would have been overlabouring the point. If I had the models in my studio I would probably have overworked it'.