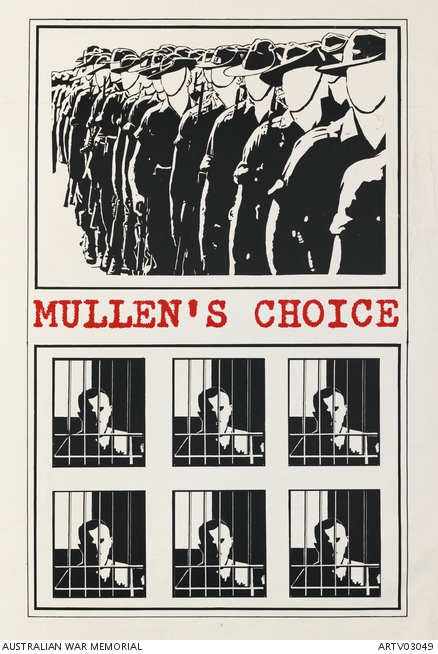 A line of marching, faceless Australian soldiers and six repeated images of a silhouette of a man in goal. The poster relates to Geoff Mullen's imprisonment on March 22, 1971 when he was jailed for 2 years for resisting the draft. He had registered for national service in 1967, but refused medical examinations in February and August 1968. For these actions he was fined and goaled for 29 days in February 1969. In November 1967 when he had decided not to comply with the National Service Act, he wrote to the Department of Labour and National Service explaining his action. In March and April 1969, shortly after his release from jail, he wrote articles for the 'Sydney Morning Herald' and 'Tribune', opposing conscription. During his campaign against the National Service Act , he nominated for election to the House of Representatives in 1969, standing against the then Minister for Labour and National Service, Mr. Bury. Geoff Mullen and Michael Matteson campaigned extensively against the Vietnam War. Their going to jail made conscription an election issue in 1972 and ultimately forced its withdrawal from use by the new Labor government.