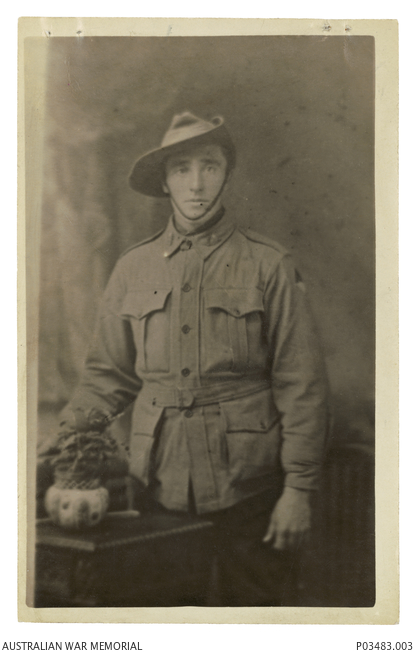 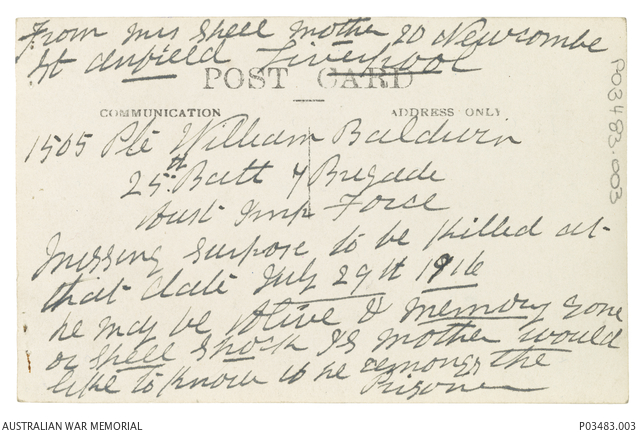 Studio portrait of 1505 Private William Baldwin, 25th Battalion. Born at Tranmere in Birkenhead, England, he had served in Kitchener's Fighting Scouts during the South African War (Boer War) before travelling to Australia to work as a miner. He enlisted with the Australian Infantry Force on 2 February 1915, and sailed aboard HMAT Aeneas with the 25th Battalion. He was killed in action on 29 July 1916 in the Somme area of France, aged 37, and is commemorated on panel 103 at Villers Bretonneux, France. This photograph is from an Australian Red Cross Wounded and Missing Enquiry Bureau file. The Bureau, which commenced operation in October 1915, sought to identify, investigate and respond to enquiries made regarding the fate of Australian personnel. It investigated the majority of personnel posted as wounded and missing on official Army lists, as well as written enquiries from concerned relatives and friends. Approximately 32,000 individual case files were opened for Australian personnel who were reported as wounded or missing during the First World War. The Bureau employed searchers to operate both at the front and in Britain. They searched official lists of wounded and missing, interviewed comrades of missing soldiers in hospitals and wrote to men on active service. Altogether 400,000 responses were sent back to those who placed enquiries with the Bureau.