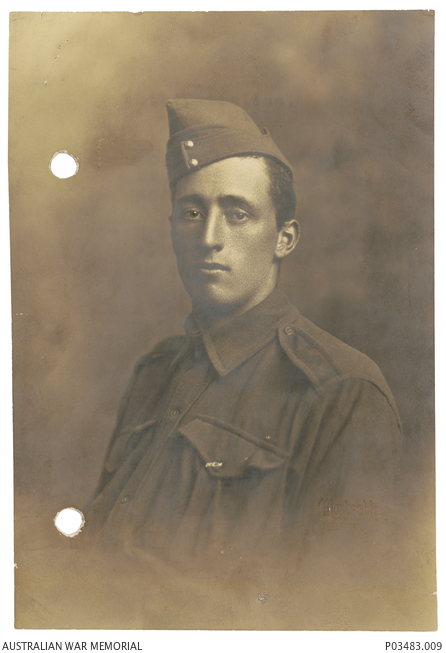 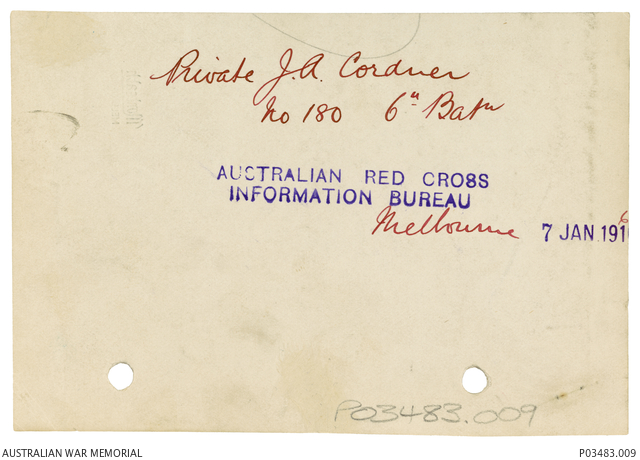 Studio portrait of 180 Private (Pte) Joseph Allen Cordner, 6th Battalion. A clerk of Hamilton, Victoria, he was a talented player for Collingwood Football Club prior to enlisting on 22 August 1914, and sailed as part of B Company, 6th Battalion, on 19 October 1914, aboard HMAT Hororata. He was killed in action on 25 April 1915, aged 24, shot after being separated from his Battalion at Cape Helles. He is commemorated on the Lone Pine Memorial, Gallipoli Peninsula. This photograph is from an Australian Red Cross Wounded and Missing Enquiry Bureau file. The Bureau, which commenced operation in October 1915, sought to identify, investigate and respond to enquiries made regarding the fate of Australian personnel. It investigated the majority of personnel posted as wounded and missing on official Army lists, as well as written enquiries from concerned relatives and friends. Approximately 32,000 individual case files were opened for Australian personnel who were reported as wounded or missing during the First World War. The Bureau employed searchers to operate both at the front and in Britain. They searched official lists of wounded and missing, interviewed comrades of missing soldiers in hospitals and wrote to men on active service. Altogether 400,000 responses were sent back to those who placed enquiries with the Bureau.