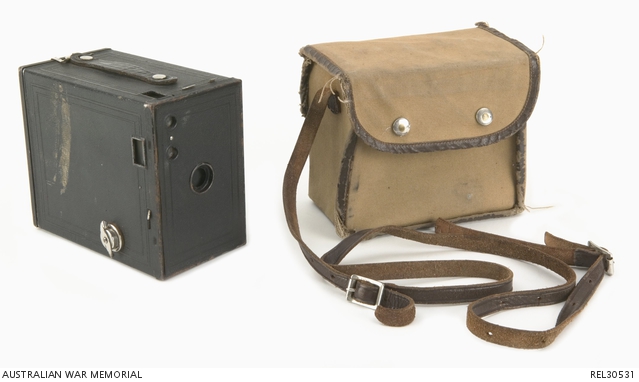 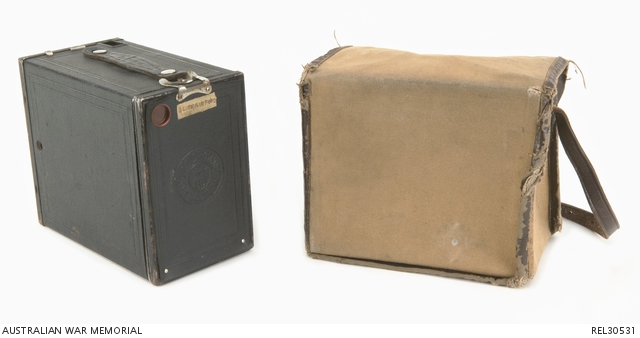 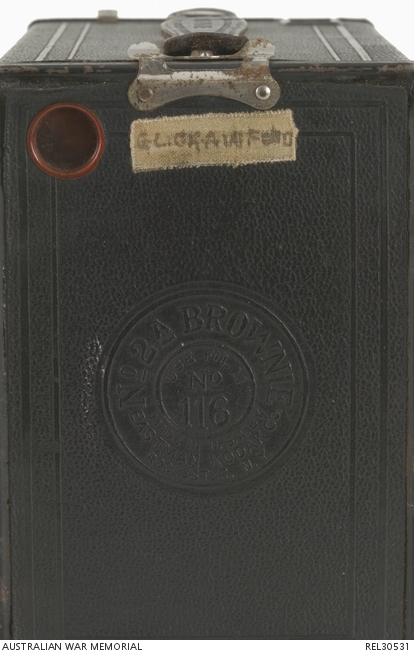 No. 2A Brownie camera made in the United States of America by Eastman Kodak Company, which is often referred to as a 'box brownie'. The outer case consists of black coloured fabric over a metal body, with a black leather carry handle on the upper surface. At one end are three lenses or apertures which relate to the capturing of the image, with two rectangular apertures on the adjacent upper corner and two silver coloured metal levers. A silver coloured metal handle is also located on the side of the camera, which rotates in an anti-clockwise direction. On the rear opening panel is an orange coloured lens, a manufacturer's stamp which is imprinted 'No2A BROWNIE USE FILM No 116 MADE IN U.S.A. BY EASTMAN KODAK Co. ROCHESTER, N.Y.' and a length of adhesive fabric which is hand printed with 'G.L.CRAWFORD'. Two tripod or mount screw threaded holes are situated on the base and opposite side to the handle. The camera is enclosed in a tan coloured canvas carry case, with a brown leather strap, which is only attached to the case on one side. The edges of the case are bound with a darker colour material which is worn. The case is sealed by a fabric flap, which is secured with two silver coloured metal studs. On the inner side of this flap, is stamped '21B' in blue ink.

This No 2 A Brownie camera was used by Gladys Lila Crawford who was born in Benalla, Victoria in October 1908. During the 1930s she worked as a mothercraft nurse and in May 1939, aged 31, joined the Voluntary Aid Detachments. In February 1941 she volunteered for overseas service and formally enlisted in the Australian Military Forces on 21 April with the service number V13447. On 17 October she was discharged and joined the Australian Imperial Force and was assigned the new number VFX64863. She served initially at 115 Australian General Hospital at Heidelberg and on 1 November sailed for the Middle East from Sydney aboard the Queen Mary. From November 1941 to March 1942 Gladys served as a nursing orderly with 1 AGH in Palestine, transferring to 6 AGH for the remainder of her overseas service. The VAD returned home to Australia early in 1943 and in March that year the women became members of the newly formed Australian Army Medical Women's Service. From her enlistment in the AAMWS on 22 March 1943 Gladys underwent training at Darley, Victoria before her posting to 2/6 AGH in Atherton, Queensland. She remained there for over a year, transferring to 116 AGH in Cairns on 23 October 1944. In January the following year she moved to Redbank to serve with 128 AGH, moving in September to her last unit, 102 AGH. She remained here until her discharge on 24 April 1946. After the war Gladys returned to mothercraft nursing, gaining her qualifications in nursing and kindergarten care in the late 1940s. Gladys also became active within the Returned and Services League, serving at one time in the late 1960s and early 1970s as president of the Returned and Servicewomen's sub-branch of Victoria. She died on 1 December 2000.