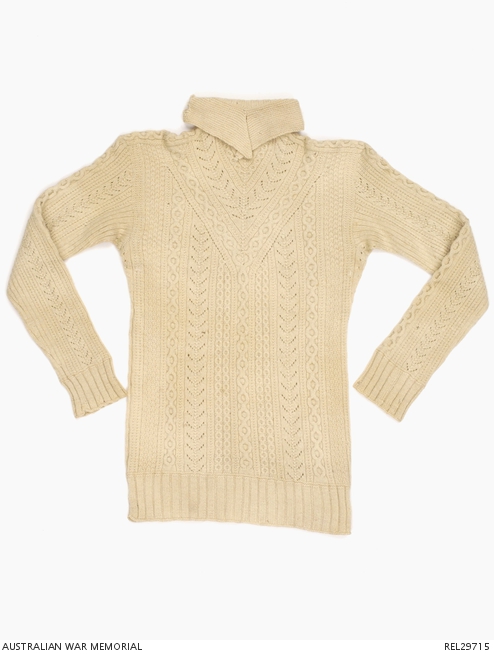 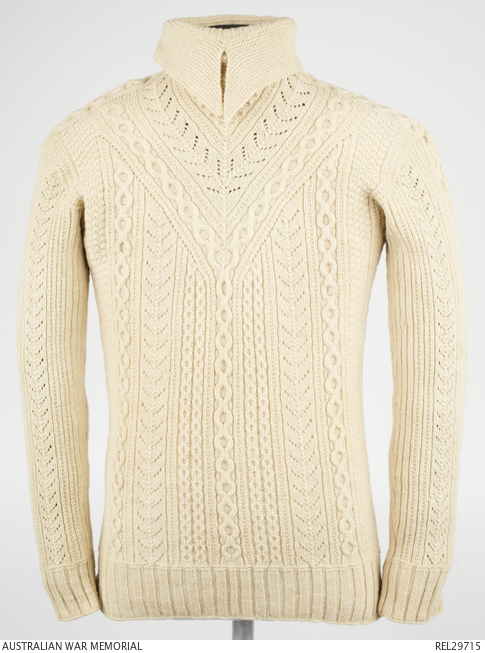 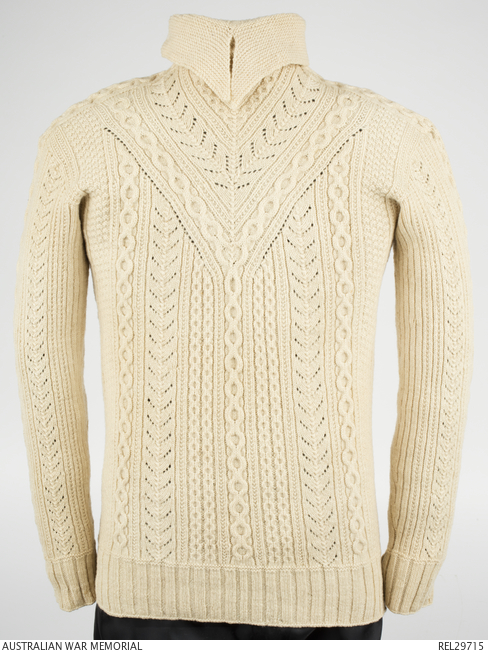 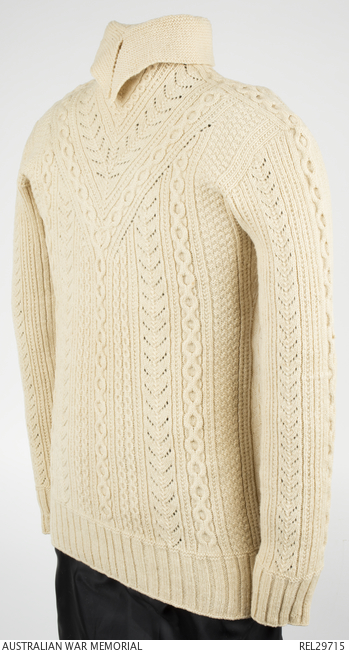 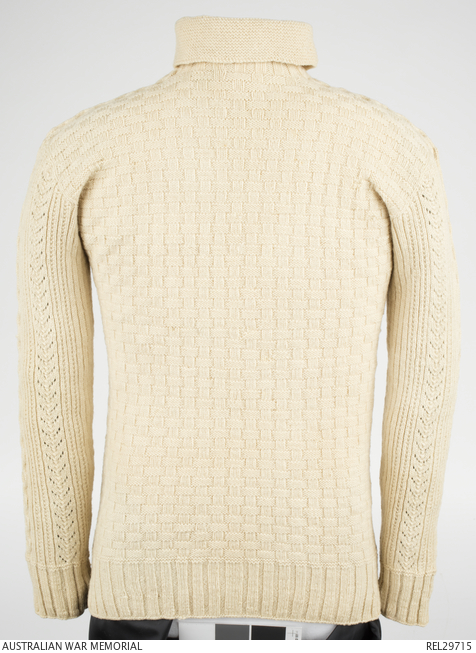 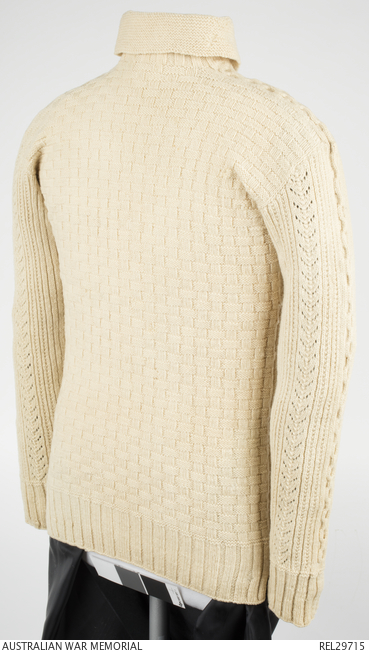 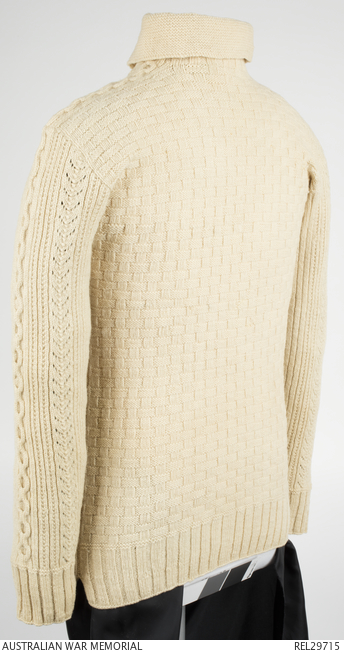 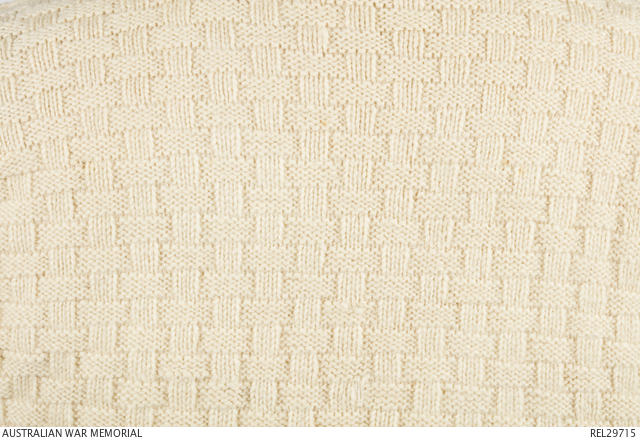 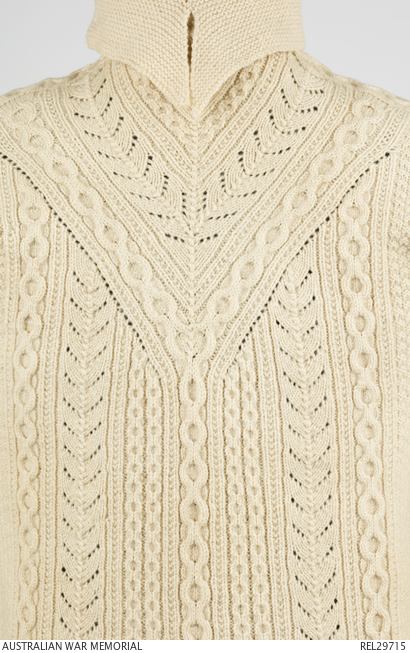 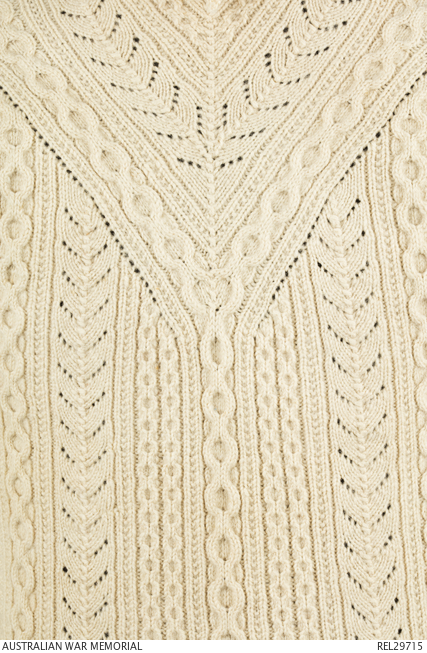 Handknitted pullover in cream 6 ply wool. Knitted in one continuous piece except where stitches have been picked up for chest piece, neck and sleeves. The basque and cuffs are ribbed, and the basque is slit at each side for ease of wear. The front of the pullover is knitted in vertical strips of rib, large and small chains, shell pattern and blackberry stitch. The pattern divides at the centre of the chest to form a triangular shaped upper chest piece using the same stitch patterns as the rest of the front. The ribbed neck has a fall collar in garter stitch. Both sleeves are knitted in rib, chain and shell stitches. A single row of chain stitch extends across the top of the shoulder to give an epaulette effect. Gussets, with ventilation holes worked into them, have been worked under each arm for ease of wear. The back is entirely knitted in fine basket weave sitich.

201 Company Quartermaster Sergeant Alfred Leslie Guppy, a farmer, enlisted from Benalla, Victoria, on 24 October 1914, at the age of 27. He served with 14 Battalion, AIF. At Gallipoli he was detached from the battalion to serve at Suvla Bay, assisting with scouting, bombing and sniping. For this work he was awarded the French Medaille Militaire.

In 1916 Guppy moved to France with his battalion and on 11 April 1917 he was captured by the Germans at Bullecourt. He was subsequently held in camps at Dulmen (north of Essen), Minden (Westphalia) and Soltan Z3036 (Hanover). While he was imprisoned Guppy learnt, or taught himself, knitting and made this pullover using wool obtained from comforts parcels and knitting needles made from fencing wire. He made at least one other pullover while he was in captivity. Guppy returned to Australia on 31 March 1919.