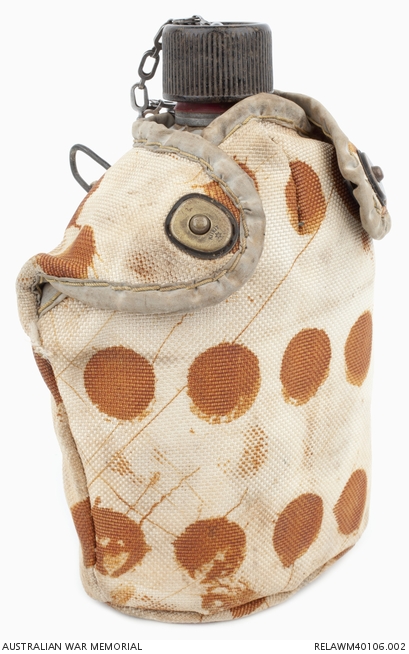 Locally modified water bottle with carrier of American manufacture. The steel bottle is impressed 'US MIRRO 1956'. The black plastic lid is missing the cork gasket, which is presumably why the neck of the bottle carries a film of red wax to provide a seal. The nylon carrier has press stud fasteners and hand stitched reinforcing, and has rudimentary camouflage in the form of painted brown dapples.

Captured by 9 Platoon, C Company, 2 Battalion, Royal Australian Regiment (2RAR) during Operation Ainslie, which was conducted from 31 August to 21 September 1967. This was a large resettlement and search and destroy operation in the Duc Thanh district of Phuoc Tuy Province, and utilized the full resources of 1 Australian Task Force (1ATF), including both 2RAR and 7RAR.

The operation focused on a collection of hamlets across an area of 43 square kilometres centred 6 kilometres north of the village of Ngai Giao. This area straddled Route 2, and was known to the Viet Cong as Slope 30. The Viet Cong used the area to consolidate supplies and distribute them along a network of radiating tracks leading to bases in other areas of the province. The two objectives of Operation Ainslie were resettling civilians and clearing the area of the enemy. Throughout the course of the operation more than a thousand civilians were moved to a village built further south called Ap Soui Nghe. In addition to engaging the enemy, Australian forces destroyed numerous bunkers and captured quantities of weapons and supplies.

During the operation on 13 September, while C Company 2RAR was awaiting helicopter extraction they engaged a group of three Viet Cong, killing all three of them. 25 minutes later, the platoon was in another contact with Viet Cong, and yet another 16 minutes later. When contact was broken after this third engagement the area was swept, and 9 Platoon recovered a quantity of weapons and equipment, including this object.