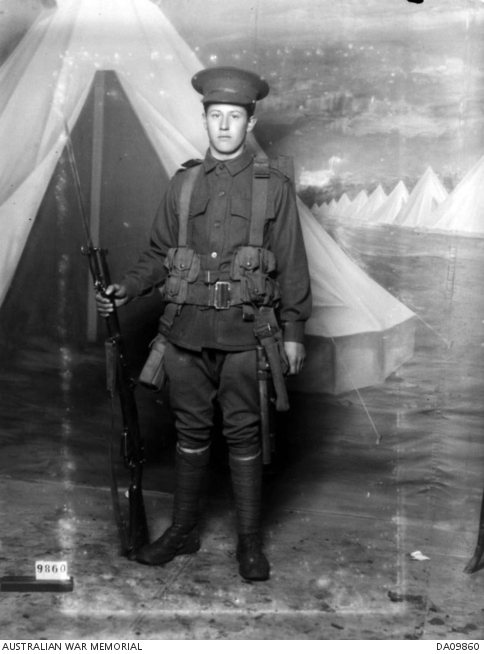 Studio portrait of 1051 Private (Pte) Arthur John Butcher, A Company, 31st Battalion. Originally from Banbury, England, Pte Butcher, nurseryman of Middle Brighton, Victoria, enlisted on 29 June 1915 and embarked from Melbourne aboard HMAT Wandilla for Egypt. His unit relocated to the Western Front, France during June 1916. He was wounded in action on 1 November 1916 and rejoined his unit three weeks later. In March 1917 he was appointed Lance Corporal and promoted to Corporal on 1 October 1917. In October 1917 he was commended for gallant service in Australian Military Orders and recommended for award of the Military Medal for his actions at Polygon Wood however, the medal was not awarded. In September 1918 he was promoted to Temporary Sergeant (T/Sgt). T/Sgt Butcher was killed in action at Bellicourt, France, on 29 September 1918. He was aged 24 years.