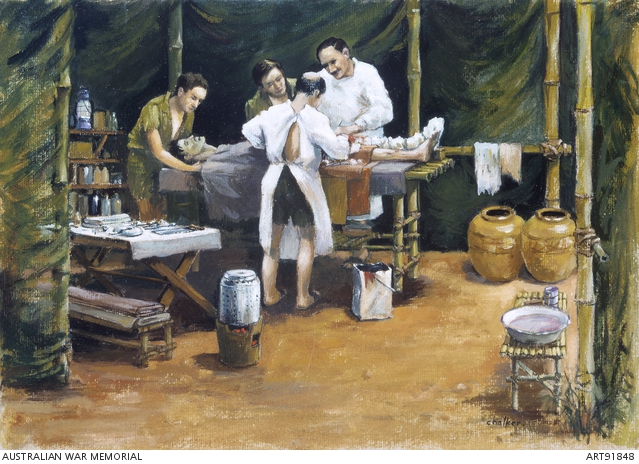 Two doctors, with two assistants, operating in the hospital theatre at Chungkai. The theatre was a small area of about twelve square feet within a bamboo and attap hut lined with old green mosquito netting. Dunlop is facing, and Markowitz with back to the viewer. Earlier leg amputations had taken place on bed-space bamboo racking at the end of one of the surgical huts. In the nine months between April 1943 and January 1944, the Canadian surgeon Markowitz performed more than 120 leg amputations at Chungkai. On 19 January 1944, two days after the arrival of Dunlop at Chungkai, Markowitz was removed by the Japanese to another camp. While the two doctors did not acutally operate together at Chungkai, Chalker has depicted them doing so as a tribute to the great and tireless efforts both men made in their attempt to save as many of their comrades as possible. On old mount (now attached to catalogue worksheet): 'Operating Theater. Chungkai P.O.W. Base Hospital 1943./ Col. E.E. Dunlop. A.A.M.C. with Capt. Markowitz amputating a leg.' JC