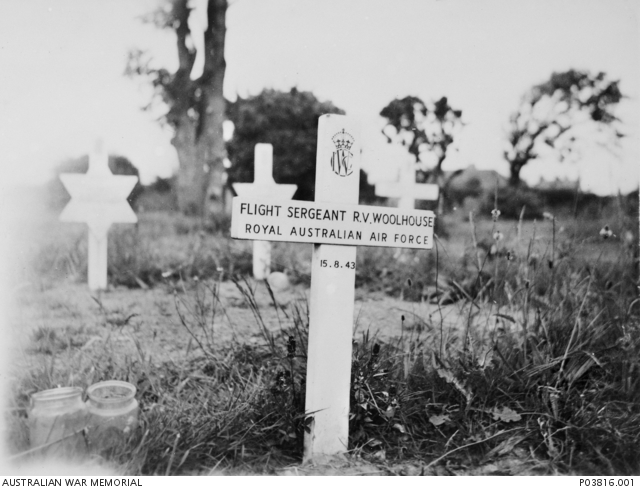 Original cross on the grave of 415748 Flight Sergeant (Flt Sgt) Ross Vivian Woolhouse, from Perth WA, an air gunner serving with 461 Squadron RAAF. On 15 August 1943 Flt Sgt Woolhouse was a member of the eleven man crew of Sunderland JM685 (UT-X), captained by Flight Lieutenant P Davenport, when the aircraft, returning from a routine patrol down the Spanish coast, was attacked by a formation of six Ju-88s west of Ushant and after repeated attacks the Sunderland was badly damaged. Flt Sgt Woolhouse, who was operating the midships turret, was killed, and the wireless operator, Warrant Officer I Jones, badly wounded. After violent evasive action the Sunderland reached the safety of a bank of clouds. The aircraft was now almost defenceless, the tail, midships and nose turrets were unserviceable, the hydraulics shot away and when the aircraft flew out of the clouds it had a further 300 miles to fly to reach land. The captain elected to make an emergency landing at the Scilly Islands, 25 miles west of Land's End and during the approach both inner engines cut out. The next day Sunderland T9109 (UT-D) was sent from Pembroke Dock to pick up the crew. The adventure for the crew of UT-X was not over; during the take-off UT-D struck a reef that ripped a gash down the hull. After an eventful landing at Pembroke Dock the Sunderland was quickly hauled up the slipway but was so badly damaged it was written off. Flt Sgt Woolhouse was buried on 19 August 1943 with full military honours in the Pembroke Dock Military Cemetery.