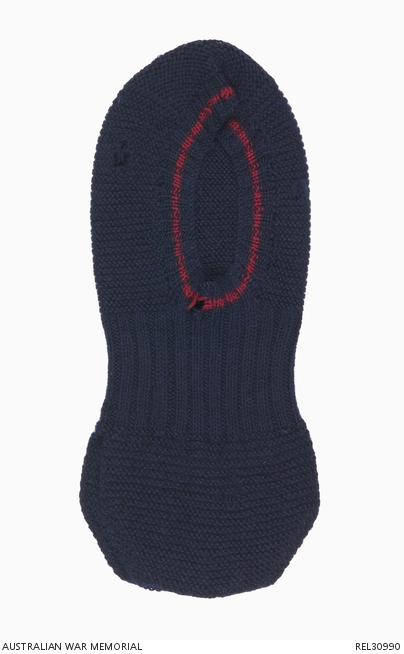 Hand knitted balaclava made from dark blue wool knitted in a combination of garter and rib stitch patterns. Knitted around the face opening are two rows of red wool. Stitched in red to the inside of the back flap are the initials 'GWC'.

Balaclava made for 457 Squadron Leader Geoffrey William Coventry by his mother-in-law, Mrs Lillian Lock. Coventry enlisted in the Royal Australian Air Force on 16 January 1939. He trained as a pilot at Point Cook and Laverton and became commanding officer of 11 Squadron, RAAF in March 1944. The squadron was based in Cairns, Queensland and operated Consolidated Catalina aircraft in the Pacific on minelaying operations, patrols, searches and reconnaissance missions. On 2 May 1944 Coventry responded to a distress call from United States Army vessel F-117 which urgently required a pump to remove water from its engine room. Coventry and his crew successfully delivered the pump to the vessel, flying 500 miles from Cairns to the Coral Sea in Catalina A24-32. However, during takeoff the flying boat struggled to overcome the considerable swell and was hit by a wave, forcing the nose into the water and breaking the aircraft in two. Coventry is thought to have been killed instantly. His body was trapped in the cockpit, unable to be recovered. The eight crew members managed to escape the sinking aircraft and were rescued by the American vessel and taken to Milne Bay.