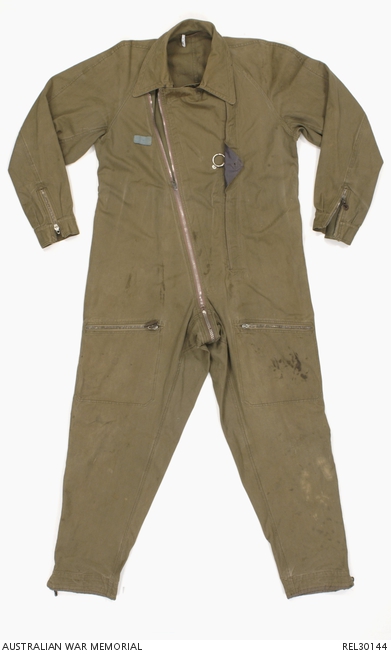 One piece summer weight flying suit as used by Luftwaffe forces during World War Two, and normally referred to as a 'sommerfliegerkombi'. Made from heavy weight khaki cotton (as opposed to the more common 'salt and pepper' weave), the suit features a long diagonal 63 cm zipper running from the right shoulder to the top of the fly, directly below which is a vertical 18.5 cm zipper fly. This fly (previously horizontal) indicates a later war version of the suit. Zippers also close the cuffs and the legs to the knees, while two waist zips allow access to the clothing underneath the suit. A pair of cargo pockets mounted just above knee level are also provided with zips.

Another feature marking this as a later war suit is the ring pull emergency release incorporated into the left hand side of the suit. Concealed by a vertical flap, this 60 cm long leather reinforced release system features a cord laced through metal eyes and leather tongues, with one end attached to a 4 cm metal ring, externally mounted. By pulling on this ring, the lacing could be undone and a wounded crew member removed from the suit without the need for undoing zippers. A triangular flap of fabric with a snap fastener (missing on this example) closes over the ring. The right breast has a 5.2 cm x 2.5 cm rectangle of felt sewn to it which displays evidence of previously having a badge pinned to it. Two hook and eyes are provided for closing the collar. The belt loops exist but the belt is missing. The manufacturer's label is sewn vertically to the inside of the emergency release.