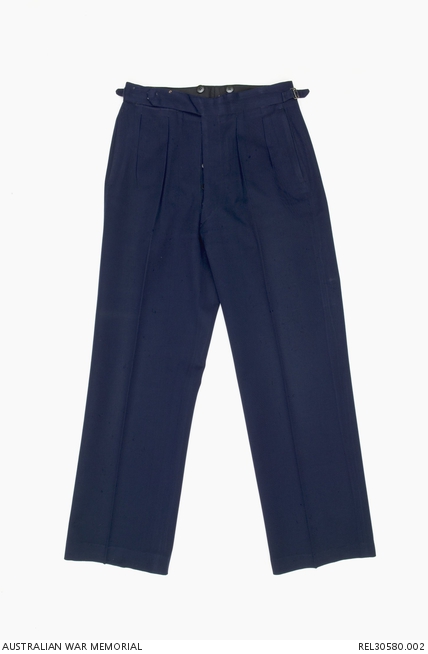 RAAF blue officer's winter service dress trousers with front pleats. The trousers have a concealed five button fly, and five buttons around the inside of the waistband for the attachment of braces. The waistband is slightly raised at the back and is lined with black polished cotton. There are pockets in each side seam and on the right rear. There is also a coin pocket on the right front waistband. Each pocket is lined with white cotton and the lining of the rear pocket is marked in black ink with 'P/O R. DOLDEN'.

Worn by 412234 Flight Lieutenant Reginald Dolden of Royal Australian Air Force. Dolden was born in Bexley, NSW in December 1914 and enlisted in the RAAF on 22 June 1941. He served in the Middle East with 40 Squadron, RAF and was awarded a Distinguished Flying Cross for his actions in June and July 1943 flying Wellington bombers over Sardinia and Palermo. Dolden was discharged from service on 7 May 1945 with the rank of Flight Lieutenant.