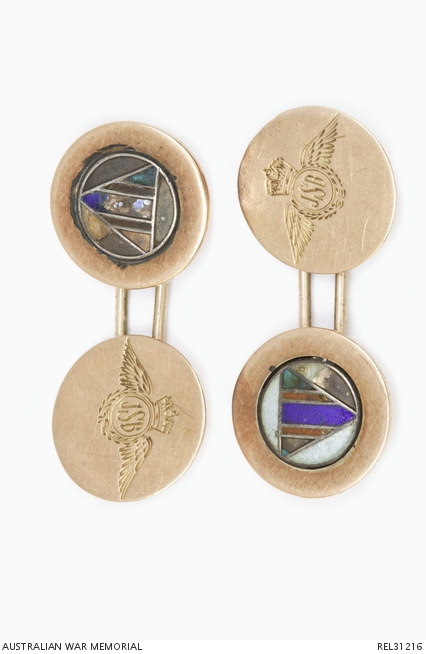 Pair of 9ct rose gold cuff links composed of two flat discs attached by a link. One disc has an enamel colour patch for the Australian Flying Corps (AFC), the other is engraved with a pair of AFC wings and impressed with the initials 'JSB'.

Worn by 140 Private Jenkyn Spencer Yonge Benham of 1 Squadron, Australian Flying Corps. Benham was born in Woollahra, NSW on 24 June 1894 and enlisted in the AIF on 14 March 1916. He embarked from Melbourne aboard HMAT Orsova on 16 March 1916 as a Private in No. 1 Squadron, Flying Corps. He embarked for return to Australia on 11 July 1917 after service in Palestine, Egypt and France and was discharged on 16 October. On 1 July 1940 while living in Oatley, NSW he enlisted in the army with the service number N65681 and served as a staff sergeant until his discharge on 9 October 1943.