Informal group portrait of the crew of 6 Squadron Lockheed Hudson A16-245 photographed on their ... 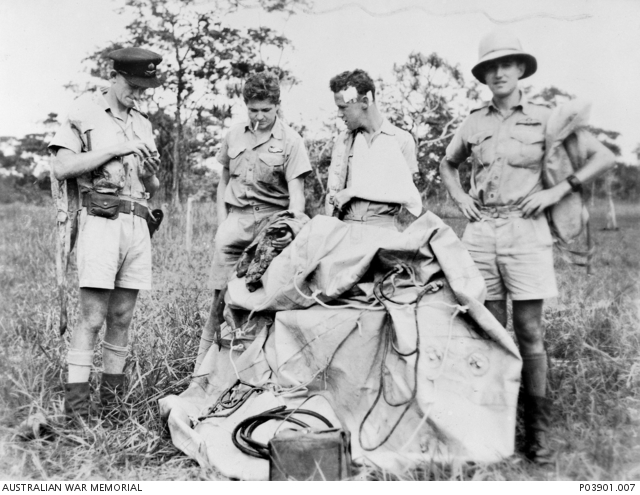 Informal group portrait of the crew of 6 Squadron Lockheed Hudson A16-245 photographed on their return to Turnbull Field. Two days earlier they were forced to ditch the aircraft in Milne Bay approximately 60 kilometres from base when poor weather delayed their return long enough for the fuel to run out. Identified, left to right: Flying Officer (FO) William ‘Bill’ Green, navigator; 416128 Sergeant (Sgt) Ernest ‘Archie’ Prime, wireless operator/air gunner, (WAG); Sgt John H Clark, WAG, (note his bandaged forehead, an injury sustained in the ditching); pilot 415152 Flt Lt Ray Kelly. They are standing in front of the Hudson's rubber dingy which Kelly had set to be released automatically via the seawater-activated electrical switch under the plane's nose, but which became twisted and damaged during the ditching. This experience led Kelly to recommend that in future it would be preferable to allow the aircraft to come to a stop before releasing the dingy manually. Flt Lt Kelly managed to land the Hudson within 300 metres of the northern shore of Milne Bay in approximately 15-20 metres of water. The aircraft floated for five minutes before sinking, its position marked by a rising oil slick which allowed the crew to mark its resting place with a buoy for salvage purposes. Lack of facilities meant salvage was never undertaken and the aircraft still lies on its back on the sandy bottom of Milne Bay. After being rescued by locals in their lakatois (outrigger canoes), the crew was picked up by a US PT Boat from the nearby PT base at Kona Kope and taken to the patrol gunboat (and PT boat tender) USS Tulsa, where the crew spent the night, enjoying what Flt Lt Kelly recalls as a very comfortable meal, before being returned to the RAAF base at the western end of the Bay.