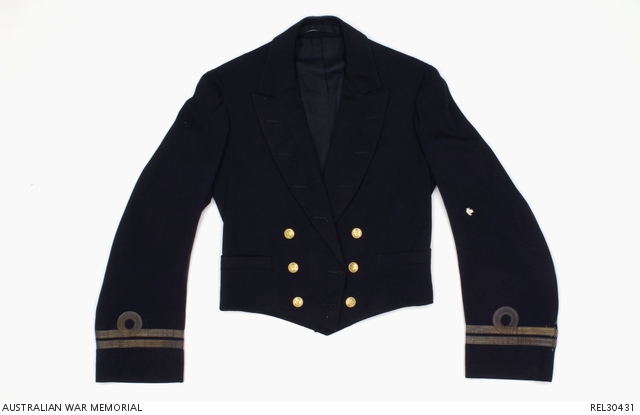 Naval officers blue superfine wool mess jacket lined with self fabric, black silk and white cotton. The double breasted jacket has a turn down collar, six button holes in each row (four in the turn of the collar and two below) and three pairs of gilded brass Royal Naval Reserve (RNR) officers buttons. Only the two lower buttons are designed to be fastened. The waist length jacket is slightly gathered over the hips and has a rounded peak behind. There are two small welt pockets set on each side of the front of the jacket, parallel with the second row of buttons. Each sleeve has gold lace rank stripes for a lieutenant in the Royal Australian Navy. This contrasts with the RNR buttons on the jacket.

Gerald Ashby Hill was born at Birmingham, England in 1880. He had already qualified as a master mariner in the Merchant Navy when he was taken on strength in the Royal Naval Reserve as a sub-lieutenant in 1909.

Hill was promoted to lieutenant in 1913 and in May that year was lent for duty aboard HMAS Australia. He was a member of the Military (sea-going) Branch and had completed short courses in signalling, gunnery and torpedoes.

This was typical of experienced merchant seaman who were recruited and trained by the Royal Navy and then sent to Australia to assist with development and training in the Royal Australian Navy (RAN), which had been established in 1911. Hill was posted to HMAS Yarra in July 1914 and took part in the seizure of German New Britain by the Australian Naval and Military Expeditionary Force (ANMEF).

HILL commanded one of the columns sent to capture the Bitapaka Road on 11 September 1914 and was the first member of the Australian forces to capture an armed enemy force in the First World War. He transferred to the RAN in 1915 and served in HMAS Torrens in European waters for the rest of the war. Hill retired in 1920 and settled in Sydney, dying there in 1931.