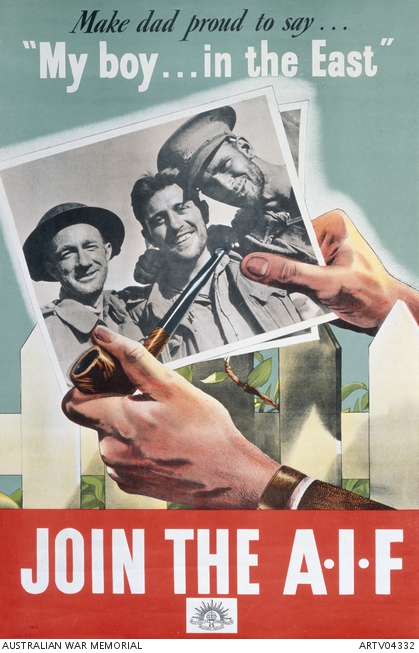 One of a series of Australian Commonwealth Military Forces Second World War recruitment posters issued under the title "JOIN THE AIF". This poster subtitled ' Make dad proud to say..."My boy...in the East " ' features a graphic of a man's hands holding a photograph of a group of smiling soldiers, his pipe in his right hand and the picket fence of the garden in the background. The poster appeals to the male to enlist, ensuring that his father will associate filial loyalty with patriotism. The image is set against a green background in the top two thirds of the poster with the main title and rising sun emblem printed in white beneath. The photograph featured was taken for the Department of Information by photographer George Silk in 1941. It is of three Australian Servicemen in Alexandria after their evacuation from Crete along with 15,000 other Allied troops. (AWM 007786)