Australian prisoners of war (POW) collect their meals at an outdoor kitchen at Changi camp. This ... 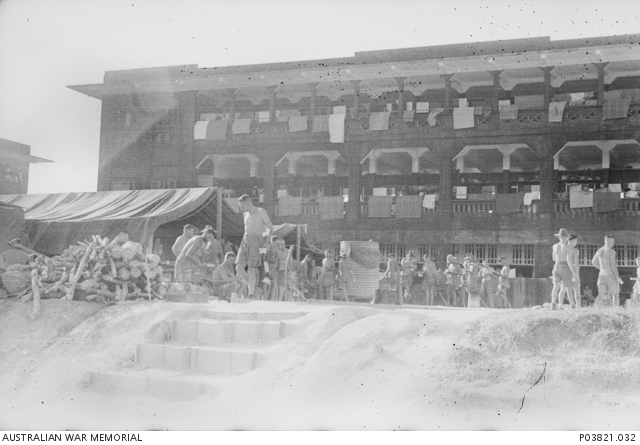 Australian prisoners of war (POW) collect their meals at an outdoor kitchen at Changi camp. This photograph was taken secretly by VX45320 Major (Maj) Kennedy Byron Burnside, Australian Army Medical Corps, Commanding Officer of the 2nd Mobile Bacteriological Laboratory, studying tropical diseases. Burnside was in Singapore with the 2/13th Australian General Hospital when Singapore fell to the Japanese in early 1942. He was interned at the Selarang Barracks, Changi prisoner of war camp, where the unit set up a laboratory. Maj Burnside hid an 8mm Bell and Howell film camera and a 35 mm Leica in the camp and recorded prison life. In August 1943, a change in prison command led to a tightening of the camp's discipline and punishment regime, and Burnside's negatives, cameras, and diaries were hidden in 15-inch brass shell cases, along with many other Australian records. The shell cases had been salvaged from the British naval guns that were emplaced in the Changi area and destroyed by the garrison. The items were buried according to star sightings, which were again used in September 1945 to unearth 12 of the 13 buried cases.