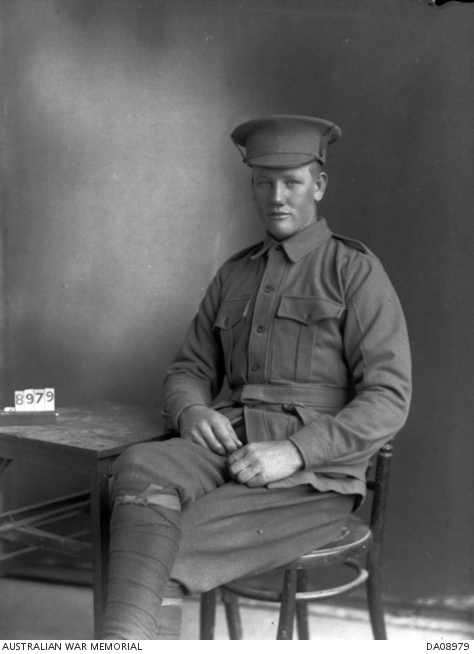 Studio portrait of 378 Private (Pte) Hubert Douglas Baylis, 24th Battalion, of Swift's Creek, Victoria. A farmer in civilian life, Pte Baylis enlisted on 11 March 1915 and embarked on HMAT Euripides on 10 May 1915 for the Gallipoli Peninsula. His battalion was withdrawn to Alexandria, Egypt, on 10 January 1916 before relocating to Marseilles on 26 March 1916. He spent nearly six months in hospital due to illness and rejoined his unit in the Somme on 9 January 1917. Pte Baylis was wounded in action on 5 February 1917 and died of these wounds on 3 March 1917 at Rouen, France, aged 21 years.
This is one of a series of photographs taken by the Darge Photographic Company which had the concession to take photographs at the Broadmeadows and Seymour army camps during the First World War. In the 1930s, the Australian War Memorial purchased the original glass negatives from Algernon Darge, along with the photographers' notebooks. The notebooks contain brief details, usually a surname or unit name, for each negative.