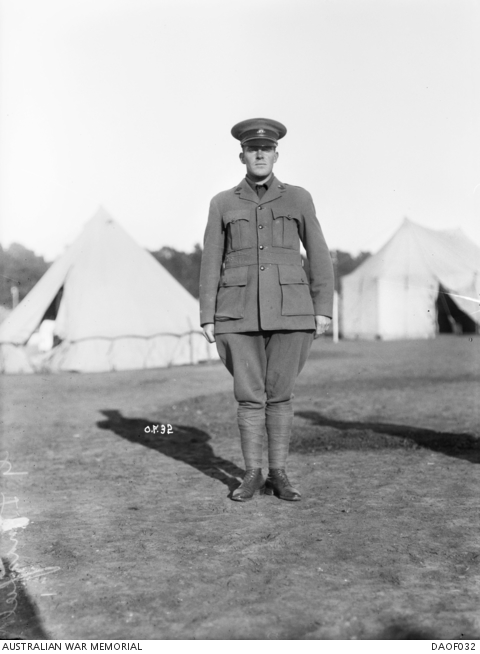 Portrait of Lieutenant (Lt) G L Maxfield, probably Lt Gordon Loris Maxfield, D Company, 21st Battalion. An accountant from Euroa, Victoria, prior to enlistment, Lt Maxfield embarked from Melbourne aboard HMAT Ulysses on 10 May 1915. During his service Maxfield achieved the rank of Captain. He was recognised as a great marksman and was awarded the Military Cross (MC) "for distinguished conduct as Company Officer in France from 26th March 1916". Captain Maxfield was killed in action at Bullecourt, France, on 3 May 1917. This is one of a series of photographs taken by the Darge Photographic Company which had a concession to take photographs at the Broadmeadows and Seymour army camps during the First World War. In the 1930s, the Australian War Memorial purchased the original glass negatives from Algernon Darge, along with the photographers' notebooks. The notebooks contain brief details, usually a surname or unit name, for each negative. The names are transcribed as they appear in the notebooks.