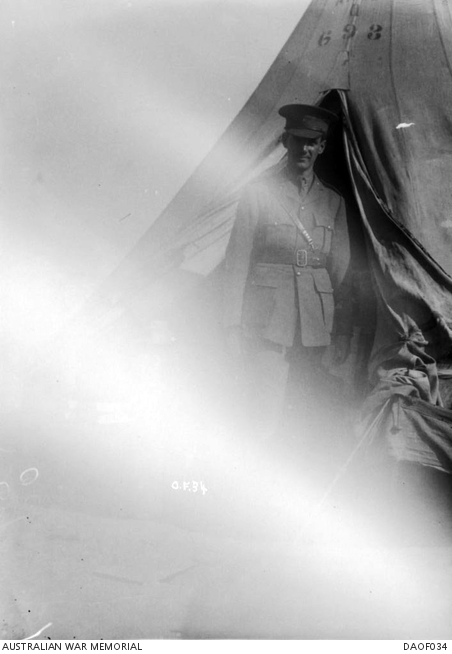 Portrait of Captain (Capt) Matthew, O C, B Company, 23rd Battalion, probably Capt Leslie William Matthews. A student from Ballarat, Victoria prior to enlistment, Capt Matthews embarked with B Company from Melbourne aboard HMAT Euripides (A14) on 10 May 1915. During his service he reached the rank of Major and was awarded a Distinguished Service Order (DSO) "for conspicuous gallantry and devotion to duty. This officer commanded his battalion in an attack, previous to which he had reconnoitred the jumping off ground, and throughout all the arrangements and dispositions. During the attack he moved about under heavy fire, keeping in touch with the situation, directing and controlling the men, and by prompt action in altering dispositions, minimized the losses from shell fire." Major Matthews returned to Australia on 1 April 1919. Matthews also served in the Second World War. This is one of a series of photographs taken by the Darge Photographic Company which had a concession to take photographs at the Broadmeadows and Seymour army camps during the First World War. In the 1930s, the Australian War Memorial purchased the original glass negatives from Algernon Darge, along with the photographers' notebooks. The notebooks contain brief details, usually a surname or unit name, for each negative. The names are transcribed as they appear in the notebooks. See also P10699.001.