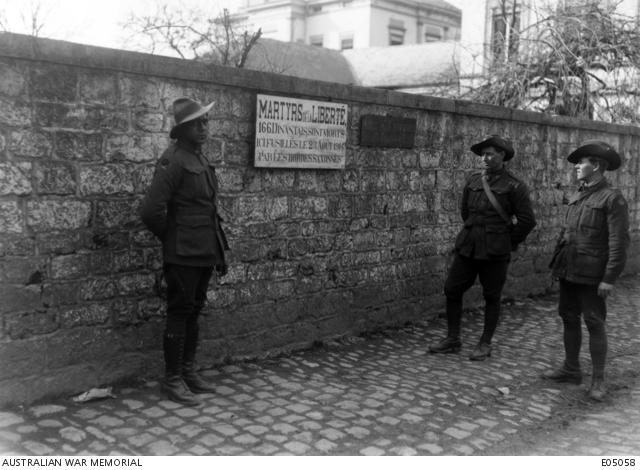 Dinant, Belgium. Three unidentified Australian soldiers viewing a tablet on a wall which records and marks the spot where over one hundred Belgian citizens were shot on 23 August 1914 by a German firing squad. On this date German troops shot over 600 men, women and children following claims that civilians had fired on German soldiers. The German army also sacked the town destroying hundreds of buildings. The tablet reads 'Martyrs de la Liberte, 166 Dinantais Sont morts ici fusilles le 23 Aout 1914, Par les Hordes Saxonnes. The sign claims 166 citizens of Dinant were shot on 23 August 1914 by the Saxon Hordes. The soldier on the far left is a member of the 12th Machine Gun Company and the soldier on the far right is a member of the 50th Battalion.