Fought between September 1943 and April 1945, the Italian campaign of the Second World War was intended principally to divert German resources away from other fronts; Italy itself surrendered on 3 September 1943 before Allied troops even set foot ashore. The campaign began with landings at Reggio di Calabria and Salerno on 9 September. The former was unopposed but the latter, carelessly planned in the expectation of a similar outcome, was heavily counter-attacked and only managed to cling to its beachhead due to the weakness of the German forces thrown against it.

Salerno set the tone for the rest of the campaign. The German forces doggedly and skilfully resisted every Allied advance using the often rugged Italian terrain to their advantage. Conversely, the Allied operations struggled due to poor planning, faltering co-operation between the American and British headquarters, and a lack of a clearly defined aim or timetable for the campaign. The Allies did enjoy almost complete control of the air, providing them with a considerable advantage in fire support, but its effectiveness was also undermined by command and control problems on the ground. The Allied advance ground to a halt before the heavily fortified town and monastry of Casino between January and May 1944 and four battles would have to be fought before it was finally captured. An attempt to outflank the German defensive line founded on the Casino position had been made by an additional amphibious landing behind it, at Anzio on 22 January 1944. The opportunity presented by an almost unopposed landing within 50 kilometres of Rome was squandered, however, again due to planning and command failures.

Rome did not fall until 4 June 1944. The Allied pursuit following the German withdrawal was slow and inflexible allowing them to consolidate on another defensive line, known as the Gothic Line. The fighting to break through the Gothic Line lasted until December. By now, operations in western Europe had well and truly relegated the Italian campaign to a sideshow with the sole aim of pinning down the maximum number of German divisions, while Germany's defeat was brought about elsewhere. Allied strategy in Italy was therefore founded on the principle of destroying German armies there before they could withdraw across the Alps. This was finally achieved in late April 1945 and ceasefire in Italy was signed on 2 May 1945. The war against Germany ended six days later.

The Italian campaign resulted in 312,000 Allied and 434,646 German casualties. Strategically, the campaign only partly fulfilled its aims. It is assessed as having tied up over twenty German divisions, but at the same time it was a distraction for the Allies and the Germans were still able to mass 26 new divisions for the Ardennes offensive in Belgium in December 1944 without having to draw upon troops in Italy. 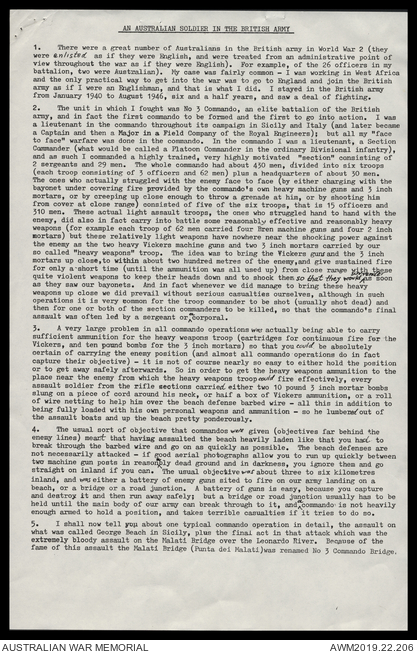 Wallet 1 of 1 - Memoir titled "An Australian Soldier in the British Army" by John C Erskine, 1989