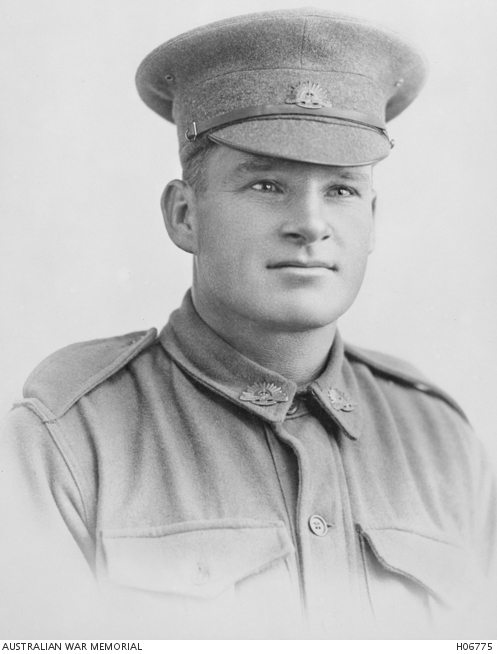 Studio portrait of 1929 Private John Charles Bowden, 31st Battalion, of South Melbourne Vic. A bank manager prior to enlistment, Pte Bowden embarked with the 2nd Reinforcements from Brisbane aboard HMAT Kyarra on 3rd January 1916. Pte Bowden later transferred to the 59th Battalion with the rank of 2nd Lieutenant (2nd Lt). He was initially reported as being a prisoner-of-war in Germany and having died of wounds received in action. This was later revised and he was officially recognised as being killed in action on 19th July 1916 in France and is commemorated on the VC Corner Australian Cemetery Memorial, Fromelles, France. In 2008 a burial ground was located at nearby Pheasant Wood containing the bodies of 250 British and Australian soldiers including 2nd Lt Bowden. All of the remains were reburied in the newly created Fromelles (Pheasant Wood) Military Cemetery. At the time of the official dedication of the new cemetery on 19 July 2010, ninety-six of the Australians had been identified through a combination of anthropological, archaeological, historical and DNA information. Work is continuing on identifying the other remains relocated from the burial ground and buried in the new cemetery as unknown soldiers. 2nd Lt Bowden is among those who have not been identified and his name will remain on the VC Corner Australian Cemetery Memorial.