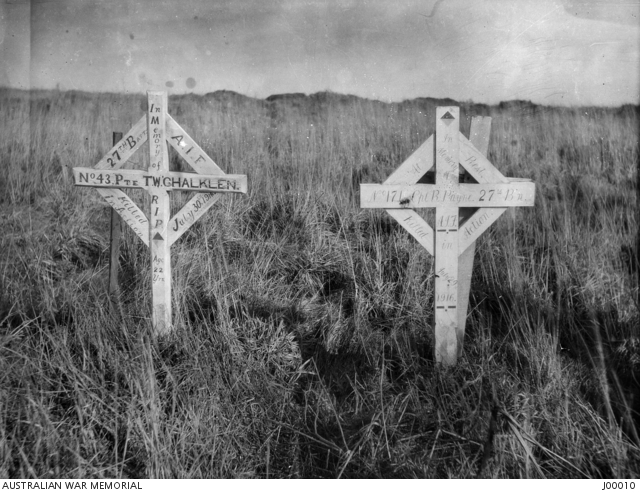 The isolated graves of 43 Private (Pte) Thomas William Chalklen and 174 Corporal (Cpl) Robert Vincent Payne, both of the 27th Battalion. Pte Chalklen, a driver from Port Augusta, SA prior to enlistment and Cpl Payne, a telephone mechanic from Richmond, SA prior to enlistment both embarked with A Company from Adelaide on HMAT Geelong on 31 May 1915. On 30 July 1916 Pte Chalklen was killed in action in France aged 20. On the same day, Cpl Payne, aged 22, was also killed in action. Following the Armistice, their remains were exhumed and re-interred in the Gordon Dump Cemetery, Ovillers-La-Boiselle, France. This image is one of a set of photographs of the original graves of some members of the 27th Battalion. The Battalion funded the purchase of the camera through its adjutant Captain (Capt) Southon for 5541 Pte G R Barrington to photograph the graves. The camera and negatives were then acquired by Major John L Treloar on behalf of the Australian War Museum, reimbursing costs for the camera to Capt Southon.
One of a set of 66 images requested by Lieutenant Colonel Frederick Royden Chalmers. The 27th Battalion history 'The Blue and Brown Diamond' relates that 4210 Henry Matthew Skinner MM and battalion photographer Barrington left Mont-sur-Marchienne on 2 February 1919 to photograph scattered graves of soldiers of the unit. Skinner features in a number of the images photographed by Barrington. Copies were supplied to next of kin and near relations.