General view of AIF graves at Harefield, Middlesex, England. Dr J R Lee and Mrs A T Sharp in the ... 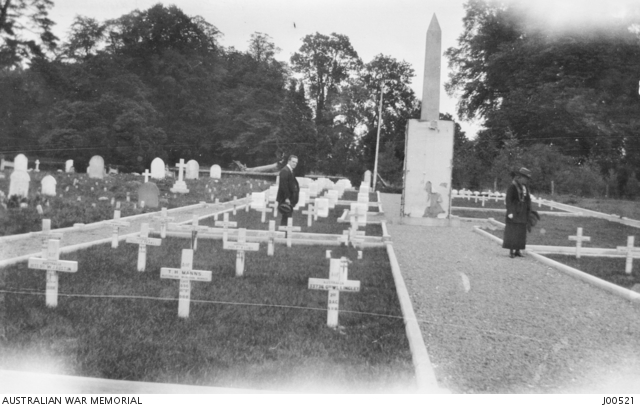 General view of AIF graves at Harefield, Middlesex, England. Dr J R Lee and Mrs A T Sharp in the centre of the picture. The grave on the left is 1033 Sergeant (Sgt) William John Austin of 4th Field Ambulance, Medical Corps, AIF HQ. Sgt Austin enlisted in Murrumbeena Vic. Sgt Austin died on 11 October 1918 aged 25 years. The grave in the centre is 2152 T H Manns, Australian Munitians Worker who died 9 October 1918. The grave to the right is 33736 Gunner William Lauderdale Lingley of the Australian Field Artillery, 2nd Division Ammunition Company. Gunner Lingley died on 5 November 1918 aged 27 years. The grave second row left is 2464 Private (Pte) Clarence Teakel of 30th Battalion, from Myrtleford, Vic, who died on 2 October 1918 aged 23 years. From the collection of Mr Alfred Thomas Sharp. Mr Sharp was the Commonwealth Immigration Officer of Victoria and was based in the London Office during the First World War. He and his wife hosted and visited many soldiers, particularly those from Victoria, who were recuperating in London. He also photographed many Australian graves in English cemeteries. His photograph collection relating to this period in London was bequeathed to the Memorial in 1922 after his death. During his time in London he was a member of the British Volunteer Regiment, serving with the Willesden Battalion, Middlesex Volunteer Regiment.