Chrisoula Borda (née Bochoyianaki) was born on the Greek island of Crete in late 1924 to parents Cristos and Irenie Bochoyianaki. She was the youngest of five siblings and grew up with her family in a small Cretan town. When her father died in c.1938, her family moved to Heraklion and operated a tavern, where Chrisoula became friends with many of the Allied troops that frequented the establishment.

Chrisoula experienced the violent invasion and occupation of Crete by the Germans in May 1941. Very early in the occupation, she brought food and clothing to the Allied prisoners of war in the local camp. She was determined to help them, and in July 1941, Chrisoula helped a young English soldier named Freddy to escape the camp. She, her sister Anna, and her mother hid Freddy in their home with the intention of sending him to Egypt at the first opportunity. However, the family was betrayed by a neighbour and in October 1941, Chrisoula and Anna were arrested, interrogated, and imprisoned. Chrisoula was sixteen years old. Chrisoula and Anna were interned in a series of prisons throughout Greece and were eventually taken north to Auschwitz Concentration Camp in Poland. They were imprisoned there for twenty months and encountered many hardships. In late 1944, the sisters were evacuated from Auschwitz to Ravensbruck Concentration Camp in Germany, and in April 1945 they were finally set free, arriving home to Crete on 17 July 1945.

In 1946, Chrisoula moved to Athens where she met Frank Xavier Borda, and they were married in 1950. Chrisoula and Frank decided to move to England. There, they adopted their son Michael, and in 1961 Chrisoula gave birth to another son named Martin. The family then moved to Australia in 1968 under the Assisted Passage Migration Scheme. Chrisoula, Frank and their sons lived in Hornsby and Rydalmere were Chrisoula worked as a seamstress. They eventually moved to Henty in 1982.

Throughout her life, Chrisoula struggled to accurately express her experiences of being a captive of the Germans in the Second World War. However, she still desired to tell her story. Though she was in her seventies at the time and her English was limited, Chrisoula taught herself to type and used Greek, German and English dictionaries to translate her words to create a memoir. Chrisoula died on 30 August 2007 and was buried in the Henty Lawn Cemetery. She was outlived by her husband Frank, who donated her memoir manuscript to the Australian War Memorial so that Chrisoula’s words may be read and heard. 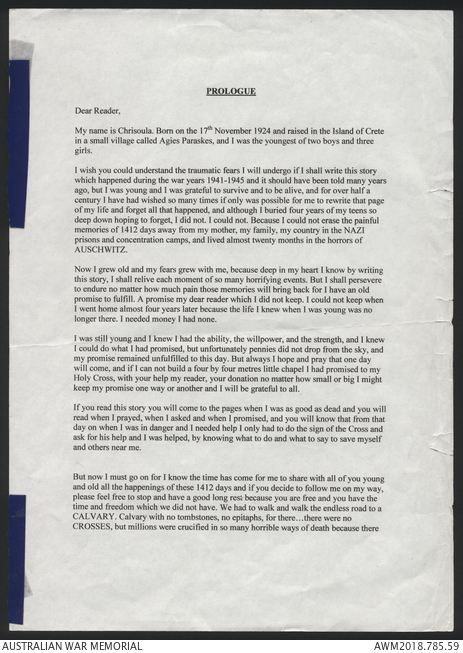