Informal portrait of a group of unidentified West Australian soldiers taken at Anzac in November ... 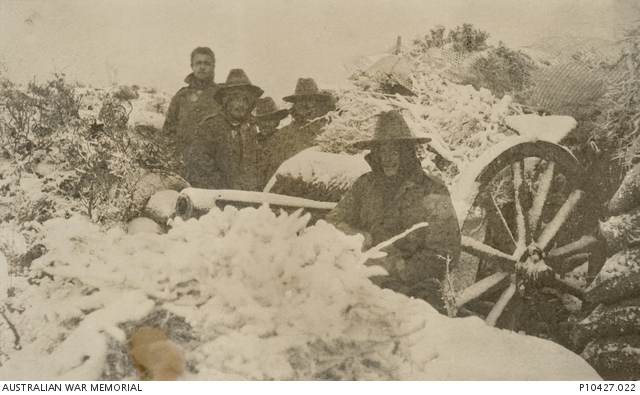 Informal portrait of a group of unidentified West Australian soldiers taken at Anzac in November 1915. This photograph was sent to his family by 4642 Gunner (Gnr) Alfred Bailey Eades, 2nd Field Artillery Brigade. A clerk from Ivanhoe, Vic prior to enlistment, Gnr Eades embarked with his brother 4666 Gnr William James Eades with the 7th Reinforcements from Melbourne on RMS Persia on 10 August 1915. After serving at Gallipoli, he went on to serve with the 12th Field Artillery Brigade where he was promoted to Second Lieutenant. Later promoted to Lieutenant, he was on leave in England when he contracted influenza and was admitted to hospital where he subsequently died on 12 November 1918 and was buried in the Brookwood Military Cemetery, Surrey, England. Gnr William Eades returned to Australia on 23 March 1919.