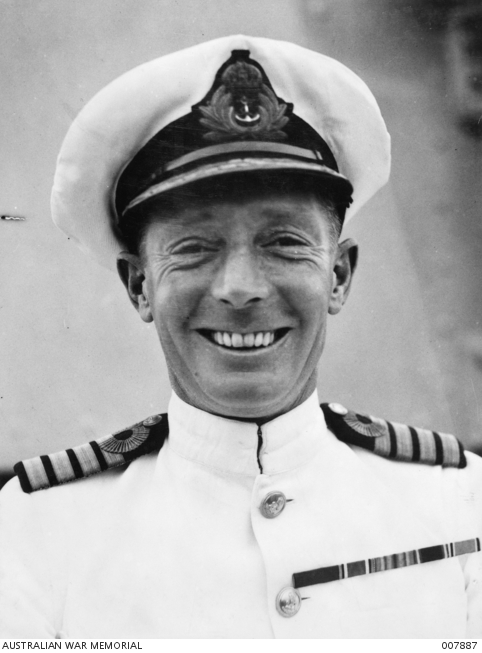 John Collins was among Australia's most well-known naval officers of the Second World War. Born on 7 January 1899 at Deloraine, Tasmania, he joined the first class of cadets at the Royal Australian Naval College, Geelong, in 1913. He graduated as a midshipman in January 1917 and went on to serve with the British Grand Fleet, operating out of Scapa Flow, during the First World War. His first ship was HMS Canada and he later joined HMS Spencer as Gun Control Officer with the rank of sub-lieutenant.

Collins was attending gunnery school when the First World War ended and returned to Australia in 1921, joining HMAS Melbourne. He attended several gunnery courses in England as well as qualifying as a deep sea diver. In 1926 Collins rejoined Melbourne as Gunnery Officer. On returning to Australia after duty with the Mediterranean Fleet, he was appointed Naval Liaison Officer for the 1927 visit of the Duke and Duchess of York.

In 1928 Collins became Gunnery Officer on HMAS Australia with the rank of lieutenant commander, then returned once more to Australia where he was given command of HMAS Anzac. In June 1930 he married Phyllis MacLachlan and was promoted to commander. In 1932 he attended the Naval Staff College at Greenwich and the following year began work as a commander in the Admiralty's Plans Division. Three years as Executive Officer on HMAS Sydney followed. In 1938 Collins was appointed Liaison Officer for Sydney's 150th anniversary celebrations before becoming Assistant Naval Chief of Staff. When the Second World War began, Collins was given command of HMAS Sydney and sailed for the Mediterranean.

A skilled and respected captain, Collins was also a humane man. Having once sunk an Italian destroyer, he lingered to rescue survivors despite the submarine threat, leaving a cutter and provisions when finally forced to leave. His most conspicuous success, however, was the sinking of the Italian cruiser Bartolomeo Colleoni in July 1940.

In August 1941 Collins was sent to Singapore as Assistant Chief of Staff to the Commander in Chief, China. Having returned to Australia following Japan's victories in Asia, Collins was made Naval Officer in Charge, West Australian Area, before being given command of HMAS Shropshire. He remained in this post, operating with the US Navy, until he transferred to HMAS Australia in 1944 as a task force commander and commodore. Collins was on Australia's bridge when, on 21 October 1944, a kamikaze attack killed the captain and other officers, wounding Collins. He returned to duty in July 1945 in time to participate in the surrender ceremonies in Tokyo Bay in September, and then was involved with the British Commonwealth Occupation Force. In February 1946, Collins became First Naval Member and Chief of Naval Staff in Australia; and in May 1950 he was promoted to vice admiral. He retired from the Navy in 1955; in 1956 he took up the post of Australia's High Commissioner to New Zealand, retiring in 1962.

Collins died in Sydney, aged 90, on 3 September 1989. A class of submarines now bears his name. 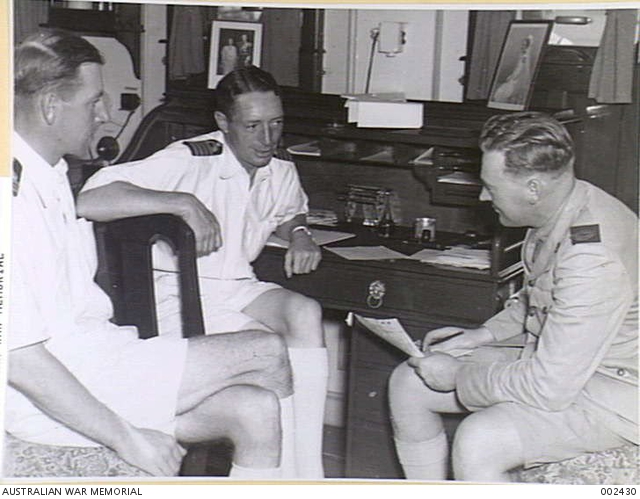 "SYDNEY" GETTING THE STORY IN THE CAPTAIN'S CABIN. CAPTAIN COLLINS, COMMANDER THRUSTON AND JOHN ... 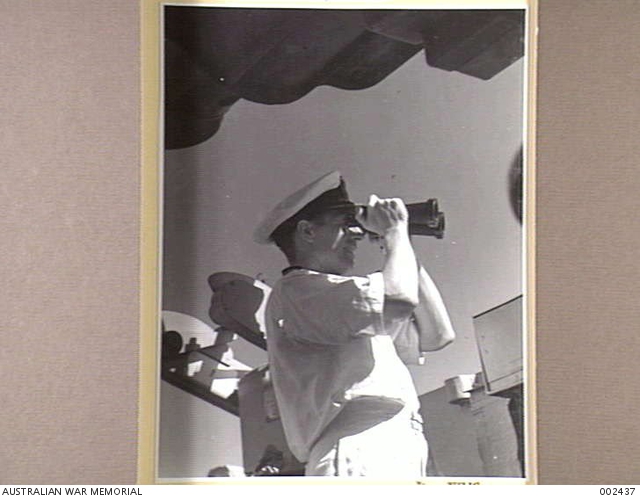 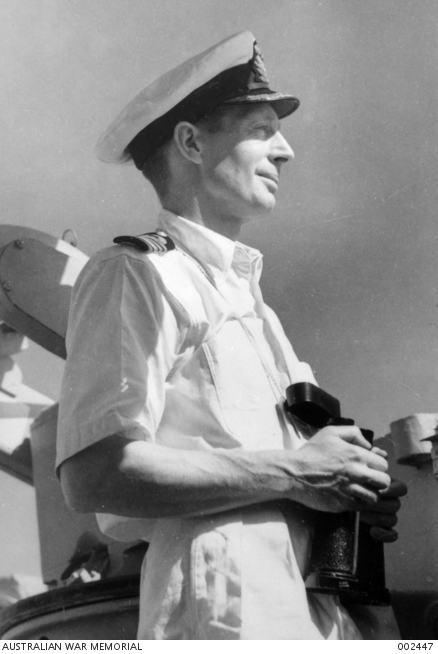 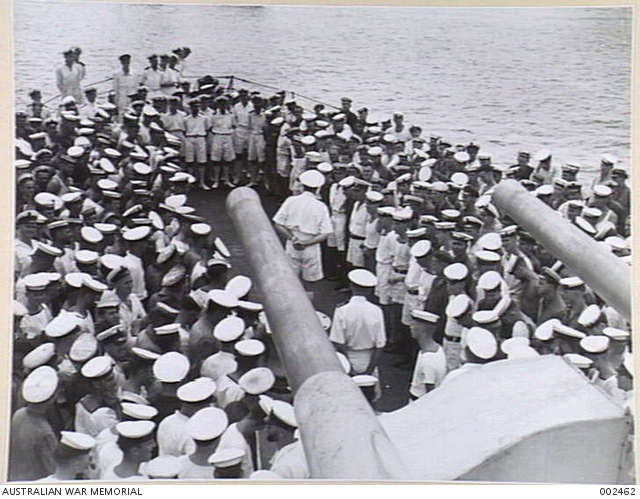 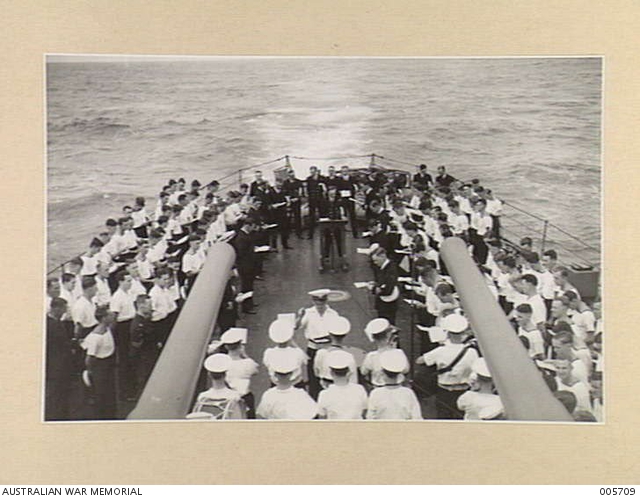 ABOARD H.M.A.S. SYDNEY IN AUSTRALIAN WATERS - SHIP'S COMPANY AT PRAYERS ON THE QUARTER DECK. ... 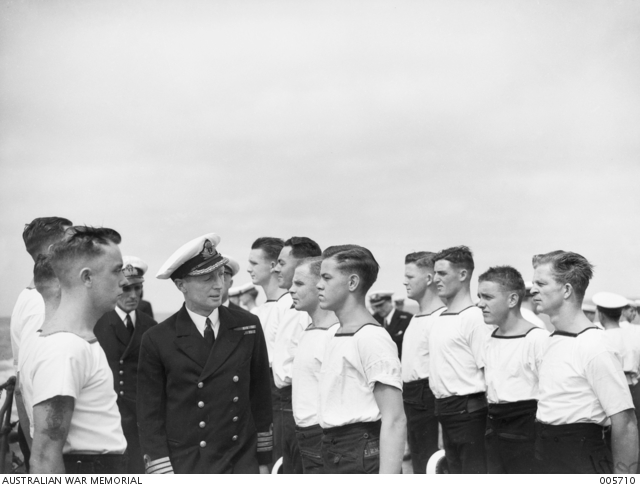 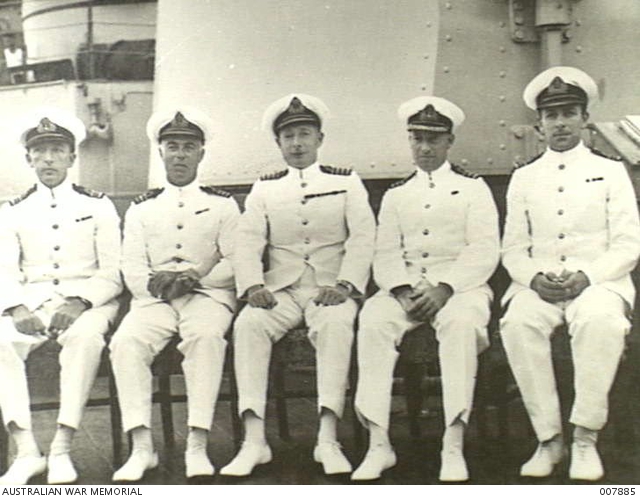 PORTRAIT OF CAPTAIN J. A. COLLINS OF HMAS SYDNEY. 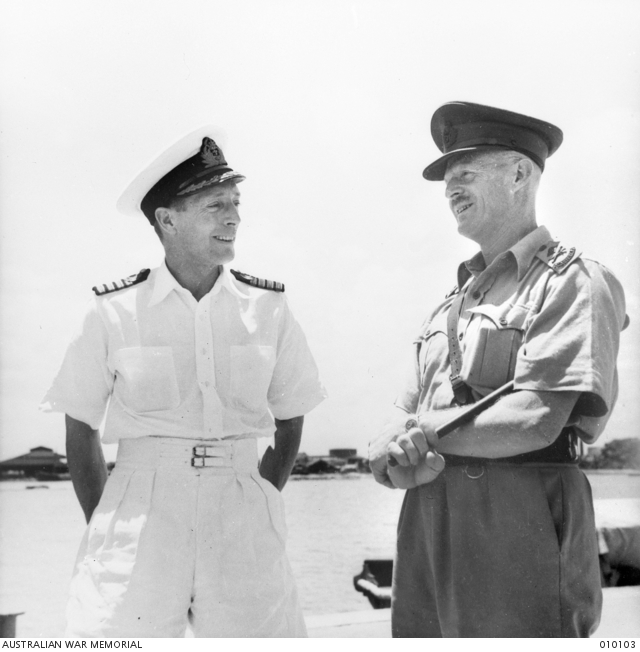 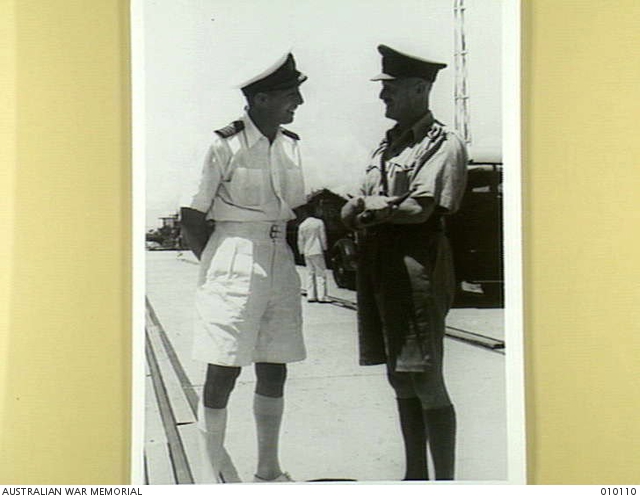