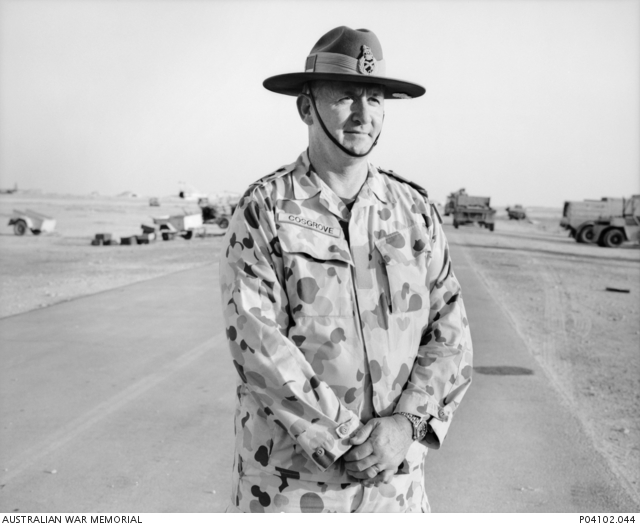 Peter Cosgrove graduated from the Royal Military College Duntroon in 1968 and has risen to become the Chief of Australia's Defence Force. He was born in Sydney on 28 July 1947 and educated at Waverley College. Having decided on a military career, Cosgrove entered Duntroon in 1965 as Australia's involvement in the Vietnam War was escalating. Graduating as a lieutenant, he was posted to the 1st Battalion, Royal Australian Regiment (1RAR) in December 1968 and subsequently served in Malaysia.

Cosgrove's next posting was to the 9RAR. He commanded an infantry platoon in Vietnam and was awarded the Military Cross. In 1970 he returned to Australia and was posted to the Methods of Instruction Team. After two years in this post, Cosgrove became Aide-de-Camp to the Governor General in 1972. The following year he was posted as temporary captain to 5RAR as second in command and in 1976 became an instructor at the Infantry Centre.

In 1978 Cosgrove went to the United States to attend the Marine Corps Command and Staff College at Quantico. Having returned to Australia in 1979 he began four years of staff appointments in Sydney, took command of 1 RAR in 1983 and became the Australian Army Exchange Instructor at the Army Staff College in England in 1984.

Cosgrove's career continued apace, in 1987 he became Military Assistant to the Chief of the General Staff. By 1990 he had become the Army's Director of Infantry and Commandant of the Infantry Centre, and two years later was appointed commander of the 6th Infantry Brigade. Another overseas posting, to India, followed before Cosgrove took command of the Australian Defence Force Warfare Centre in 1996. The next year he became Commandant of the Royal Military College, Duntroon.

In 1999 Cosgrove was promoted to major general and assumed command of the Deployable Joint Force Headquarters. This appointment would lead to the role which catapulted him to public prominence - commander of InterFET (International Forces East Timor), where he was responsible for overseeing East Timor's transition to independence. He returned to Australia in 2000 having won plaudits for his performance in East Timor where he combined the roles of soldier and diplomat to ensure that a difficult and dangerous situation was managed with a minimum of bloodshed. The following year his efforts were recognised with his being named Australian of the Year and appointed a Companion of the Military Division of the Order of Australia.

Further recognition followed with Cosgrove's promotion to lieutenant general and appointment as Chief of Army in 2000, which was followed in 2002 by promotion to general and his appointment to Chief of the Defence Force. He married his wife Lynne in 1976 and the couple have three sons. Outside his life in the military, Cosgrove has been a life-long sports enthusiast and was at one stage patron of the Australian Army and Combined Services Rugby Union and the Australian Services Cricket Association. He has received numerous international honours and awards and retains membership of several clubs and associations. 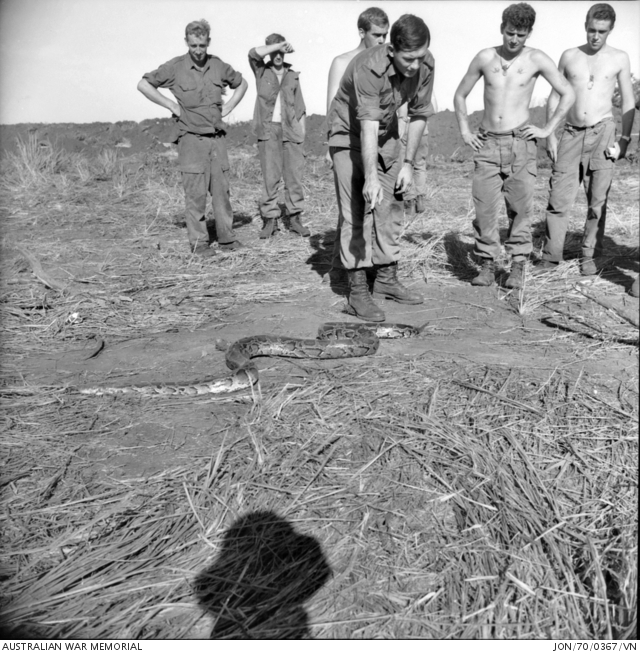 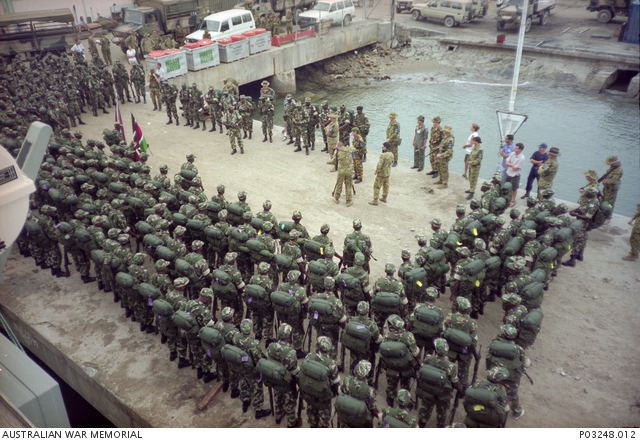 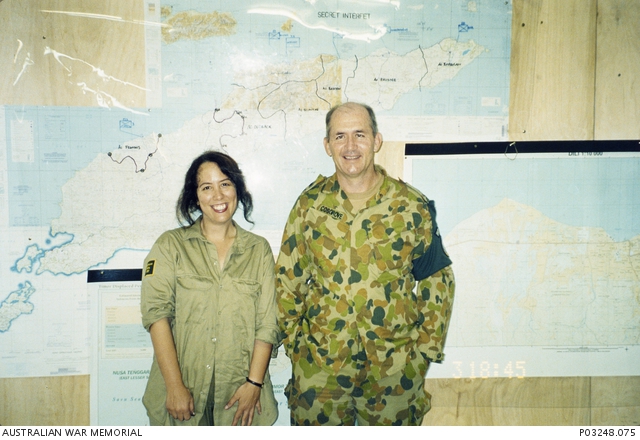 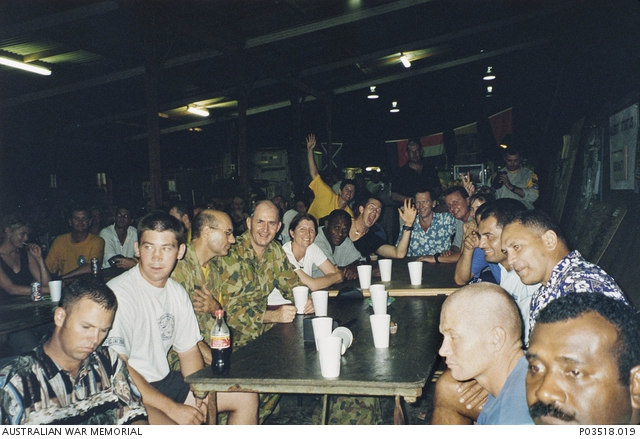 Lieutenant General Peter Cosgrove (centre) sharing the evening meal with members of the ... 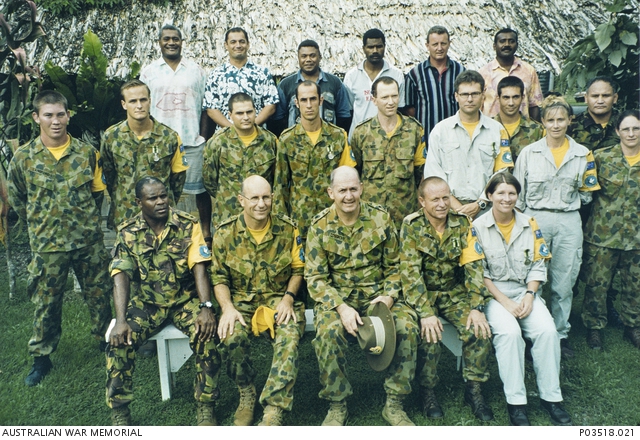 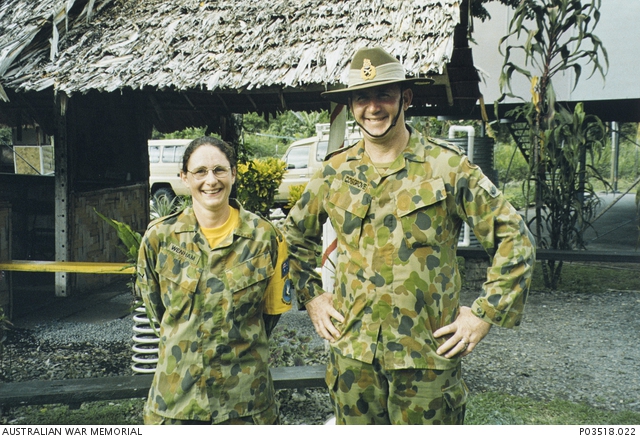 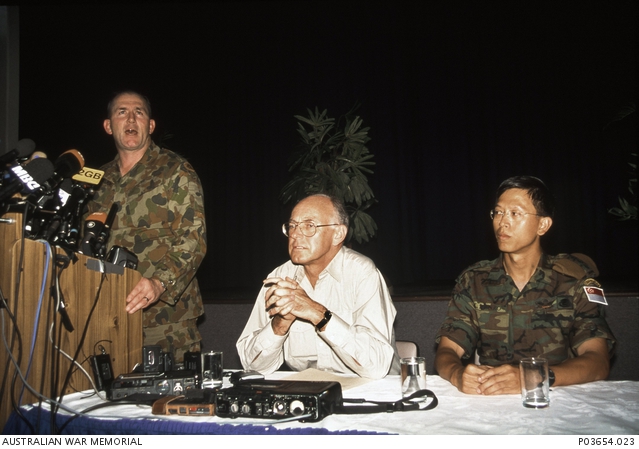 An informal portrait of the Chief of the Defence Force, General Peter Cosgrove, at the captured ...