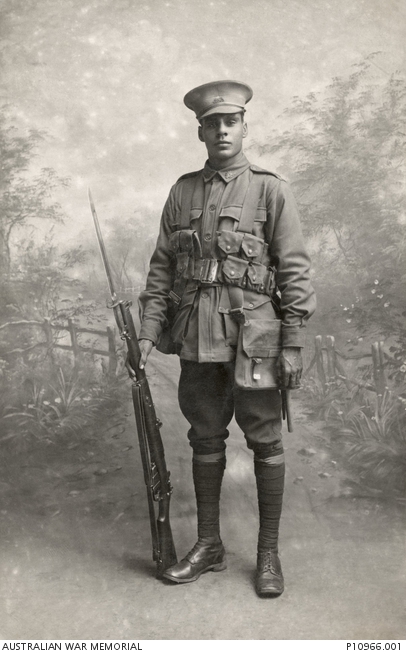 Studio portrait of 2597 Private (Pte) Frederick Prentice, 12th Battalion, and later 1st Australian Pioneer Battalion. On the verso of the photograph is an original message "Just a little card to remember the good times at Paratoo." This postcard was sent to a friend, Gertrude Fitzgerald, who he knew at Paratoo, SA. Born in Powells Creek, Northern, NT, on 18 January 1894, Frederick Prentice was educated at Kyre College (later part of Scotch College), Adelaide, from 1905 to 1908. Following schooling, Prentice worked as a station hand and was employed at Manunda Station, South Australia at the time of his enlistment on 7 May 1915 in Keswick. Pte Prentice won a Military Medal for his actions on 19 July 1916 at Pozieres, France, where he showed great courage, resource and ability in bringing machine guns and ammunition through the enemy barrage in the dark and across broken ground. Frederick Prentice returned to Australia as a Corporal on 12 May 1919.