Albert Victor Bracher was born at Norton, England during 1887 and worked as a sugarcane farmer in Central Queensland before the outbreak of the First World War. He had completed six years of service in the Royal Navy before joining his brother in Brisbane in 1909.

Bracher enlisted in the Australia Imperial Force in Maryborough, Queensland on 15 January 1915. He was assigned to the 25th Infantry Battalion and departed Brisbane on 29 June 1915 from Brisbane aboard HMAT Aeneas. Apart from time spent recovering from illness, he served at Gallipoli from September until December 1915. He was awarded the Military Medal for his actions at Gallipoli on 29 October 1915 when he was involved in dangerous patrols and reconnaissance work that included preventing a Turkish soldier from lighting a bomb that would have landed in an Allied trench.

Following the evacuation from Gallipoli, he spent some time at Mudros before arriving in France in March 1916. Albert Bracher was killed in action at Pozieres on 29 July 1916 and is commemorated on the Villers-Brettoneaux Memorial, France. 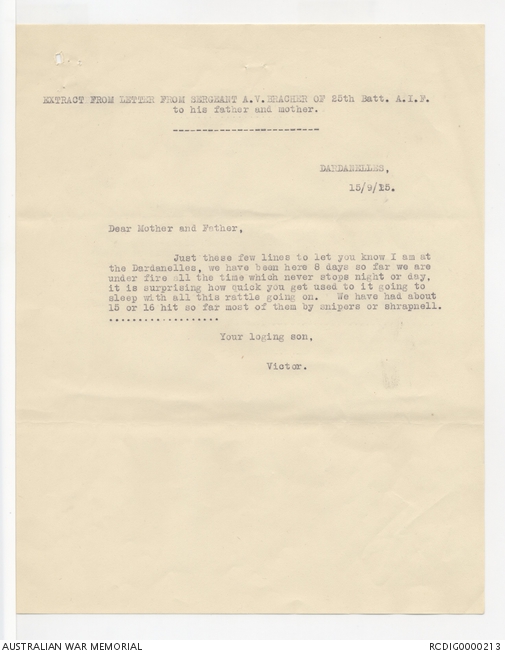 Typewritten extracts of letters from Albert Victor Bracher to his Family, 1915

Typewritten extracts of letters from Albert Victor Bracher to his Family, 1915