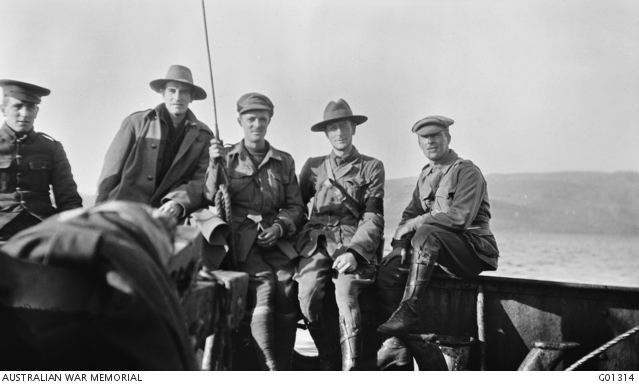 David Crothers Barker grew up in Kaniva, a small town close to the border between Victoria and South Australia. Moving with his family to Sydney as a teenager, he studied art under portrait painter Norman Carter at the Royal Art Society before travelling to the United States and continuing his training as an illustrator and printmaker at the Academy of Fine Arts in Philadelphia. He then worked as a cartographer for Curtis Publishing Company, before returning to Australia shortly after the outbreak of the First World War. In April 1915, Barker enlisted with the Australian Imperial Force (AIF); and, in May that year, he left Australia for Gallipoli with the 5th Field Ambulance.

In November 1915, official war correspondent Charles Bean called for submissions from the troops for The ANZAC Book, a collection of poems, stories, drawings and caricatures of the soldiers’ experiences at Gallipoli. After Barker was assigned as an orderly to Bean in December 1915, several of his drawings and cartoons were included in The ANZAC Book – including the cover image. Although he was never an officially commissioned war artist, many of Barker’s drawings in The ANZAC Book have become iconic of the “Aussie spirit” embodied in the troops deployed overseas.

Barker went on to serve in the Middle East in 1917 after the conclusion of the Gallipoli Campaign. During his time in Palestine, he was a regular contributing artist and co-editor of the magazine Kia-ora Coo-ee, the official magazine of the Australian and New Zealand troops serving in Egypt, Salonica, Mesopotamia and Palestine. Later, he was the art editor of the book Australia in Palestine that detailed the lives and experiences of Australian troops in the Middle East and was published after the war in 1919. He also illustrated Captain Thomas A. White’s book Diggers Abroad, published in Australia in 1920.

After returning to Australia and being discharged from the AIF in 1919, he worked as an artist in Sydney and was a founding member of the Australian Painter-Etchers Society. Many of the works that he exhibited throughout the 1920s featured a distinct Middle Eastern influence, including scenes of Palestine and Egypt. During the Second World War, Barker re-enlisted with the Australian Army in March 1940 and served on the home front until June 1943.