Percy Ernest Nimmo was born at North Adelaide on 13 April 1884 to James and Elizabeth (nee Moon). He was 31 years old and employed as a Foreman/Cellarman when he enlisted with the Australian Imperial Force on 9 September 1915. Nimmo completed seven months of training at several camps around Adelaide including Officers’ School before embarking from Outer Harbour, Adelaide, with the 2nd Reinforcements of the 48th Infantry Battalion aboard HMAT Aeneas on 11 April 1916.

Nimmo disembarked at the Suez Canal on 14 May 1916 and entrained to Tel el Kebir before proceeding to England to complete his overseas training. He disembarked at Plymouth on 16 June 1916, and subsequently spent eleven months at various camps and schools of instruction in England. He was promoted to temporary sergeant and placed on permanent cadre with the 12th Training Battalion on 1 January 1917, and qualified as a bomb throwing instructor during late February 1917.

Nimmo proceeded to France on 3 May 1917. He disembarked at Etaples the following day, and was subsequently taken on strength with the 48th Battalion on 7 May 1917. During his period of active service in France and Belgium, Nimmo was promoted to the rank of sergeant on 28 June 1917, 2nd lieutenant on 14 December 1917, and lieutenant on 5 May 1918. He was mobilised for return to Australia during March 1919, and departed Le Havre for England on 31 March 1919.

After six weeks in England Nimmo departed Liverpool aboard SS Ypiranga on 15 May 1919 and disembarked at Adelaide on 3 July 1919. He settled at Cadell, a rural locality in South Australia’s Riverland region. Cadell was one of various districts along the Murray River that formed part of a Soldier Settlement Scheme established to repatriate returned servicemen as primary producers. Consequently, Nimmo became an Orchardist as well as an advocate for returned soldiers turned fruit-growers in the region.

Nimmo enlisted with the Citizen Military Forces at Cadell on 21 April 1942. One year later he sold his property at Cadell and relocated to the inner Adelaide suburb of Frewville. Nimmo maintained contact with fellow members from the 48th Battalion, both at Cadell and Adelaide. Whilst living at Frewville, he became a member the nearby Parkside Bowling Club and joined a team comprised of members from the 48th Battalion. This team also participated in an annual diggers’ tournament involving blowing clubs from all parts of South Australia. 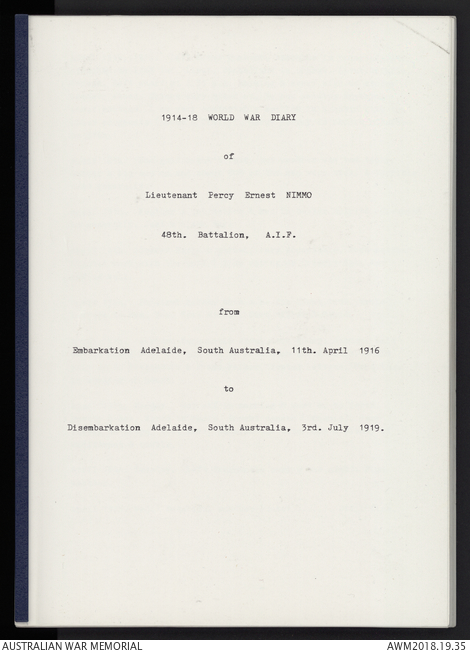