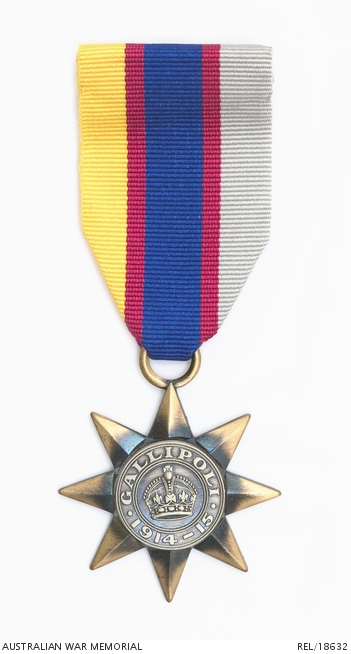 The Gallipoli Star is an eight pointed bronze star with a silver disc overlaid in the centre. This disc features, in relief, the king's crown in the centre encircled by the words 'GALLIPOLI 1914-15'. Suspension is by an integral ring from the top of the uppermost point of the star. The manufacturer's marking 'A.J.P' is impressed into the reverse. The ribbon comprises a central 9 mm blue stripe, flanked by 3 mm crimson stripes, the outer edges of 8 mm being gold on the right and silver grey on the left.

The Gallipoli Star and its ribbon were designed in 1917 by R K Peacock, but official approval from King George V for the proposed campaign medal was withdrawn after the ribbon, but not the medal, had been manufactured, because it was to have been presented only to Australians and New Zealanders, but not British or other Empire soldiers involved in the campaign. Some Anzac veterans are known to have been issued with lengths of ribbon during the war in anticipation of the medal's production.

In 1990, Mr Ross Smith, a former Australian Army Warrant Officer and Vietnam veteran, arranged, at his own expense, for dies from the original design to be manufactured, and for A J Parkes & Co Pty Ltd, of Brisbane, to strike 1000 examples of the medal. 200 of these stars were presented to surviving Australian and New Zealand Gallipoli veterans to mark the 75th anniversary of the campaign. The remainder were sold to the public. A further 1000 were later struck for sale to collectors. The design features an eight pointed star, representing the states and territories of Australia (seven points) and New Zealand. The colours of the ribbon are blue, representing the ocean, gold, representing Australian Wattle, silver grey, representing New Zealand fern, and red for the colour of Australian gum blossom and the New Zealand Rata flower.